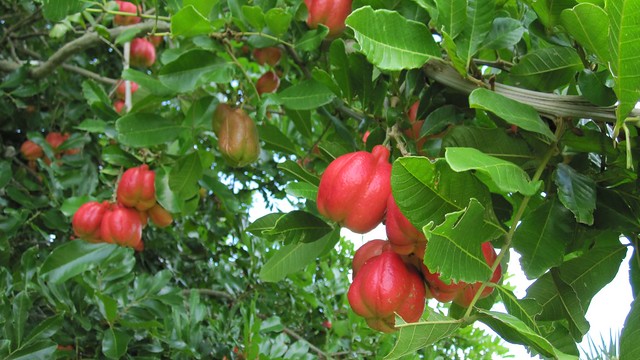 Definition of the noun akee

What does akee mean as a name of something?

Alternative definition of the noun akee

Printed dictionaries and other books with definitions for akee

The Wealth of Nature. Our Food Supplies from the Vegetable Kingdom (1870)

The akee is a tree about thirty feet in height ; the leaves resemble those of the ash ; the flowers are small and white, and are produced in branched spikes; the fruit is about the size of a hen's egg, oblong, ribbed, and compressed in the middle, ...

now common on the coast of Brazil, the akee is an African plant which was brought to America in the days of the slave trade. According to William Harris, it reached Jamaica in 1778. It is now common in that ...

Akee is a staple in the diet of the people of Jamaica, British West Indies. It is safe when the raw fruit or the spoiled aril (as poisonous as unripe fruit) is avoided. It is believed that the metabolite of hypoglycin, methylene cyclopropane acetic acid, ...

Around the World in 30 Meals by Jane Hughes

Akee is a tree fruit with a bright red bell-shaped shell/ skin that opens when ripe to reveal (usually) three creamy yellowish-white brainshaped soft fruit. There is a red string or vein in each fruit that must be removed as it is poisonous. It's not ...

Handbook of Poisonous and Injurious Plants (2007)

When ripe, Akee is a traditional food in Jamaica, where the aril is cooked with codfish. Toxin: Hypoglycin A, a cyclopropylamino acid.This toxin and its metabolites inhibit fatty acid ...

Akee is the name given to a tree, Blighia sapida,

170 Summary : Akee is a tree planted for its edible, fully-ripened fruit aril. Unripe or damaged fruit should not be eaten because of a toxic peptide, hypoglycin A. Carefully selected fruit arils are eaten fresh or cooked. Trees bear both ...

Containing Full and Complete Information as to the History, Traditions, Uses, Propagation and Culture of Such Fruits as are Suitable to Victoria, New South Wales, South Australia, Queensland, Western Australia, Tasmania and New Zealand ... by David Alexander Crichton

The Akee is a native of Western Africa, and was taken to the West Indies by Captain Bligh, who also introduced the ...

The Wizard of Food's Encyclopedia of Kitchen & Cooking Secrets

Akee is grown in Jamaica and is very popular throughout the Caribbean. When mature, the fruit splits open, exposing the edible white aril, the outer covering of the seed. ALCOHOL (cooking with) FREEZING FOODS WITH ALCOHOL If you are ...

Akee is grown in Jamaica and is very popular throughout the Caribbean. When mature, the fruit splits open, exposing the edible white aril, the outer covering of the seed. ALCOHOL (cooking with) FREEZING FOODS WITH ALCOHOL If you are ...

A dictionary and grammatical outline of Chakali (2017)

A Dictionary of Popular Names of the Plants which Furnish the Natural and Acquired Wants of Man, in All Matters of Domestic and General Economy (1882)

Akee, the native name for the fruit of Blighia sapida, a tree of the Soapberry family (Sapindacese), native of Western tropical Africa, early introduced into the West Indies, and now spread into other tropical countries. It is common in Jamaica, ...

(Except Ornamentals) by Peter Hanelt, Institute of Plant Genetics and Crop Plant Research

Online dictionaries and encyclopedias with entries for akee

Video shows what akee means. A tropical evergreen tree, , related to the lychee and longan.. The fruit of the tree, of which only the arils are edible, the ...

Couldn't select: You have an error in your SQL syntax; check the manual that corresponds to your MariaDB server version for the right syntax to use near 'akee"" IN BOOLEAN MODE) LIMIT 1,1' at line 1