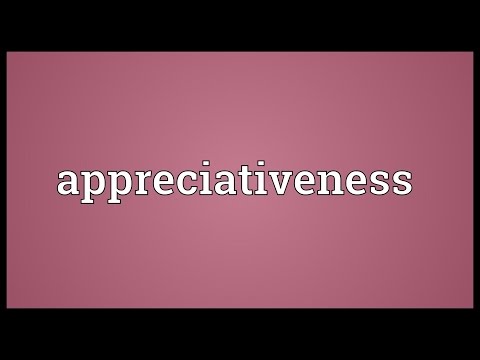 Definition of the noun appreciativeness

What does appreciativeness mean as a name of something?

Alternative definition of the noun appreciativeness

Printed dictionaries and other books with definitions for appreciativeness

The Mystery of Handwriting

APPRECIATIVENESS is a compound quality and suddenly in the centre. This sign may be absent in the writing of an irritable person, — indeed, it often is so; but if it be present, it is a sure sign that the writer is of violent and sudden temper.

A Complete Handbook to the Epistolary Art by Robert D. Blackman

surely, when we consider the spread of culture and the growth of general literary appreciativeness, we might expect the last hundred years to have produced a greater number of famous letter-writters than any other age that has gone before.

appreciativeness of achievement, and the self-denial whose ambivalent reception we saw in al-Ghazālī. Al-Ghazālī expands on the dangers of speech, ...

(our modern appreciativeness is often only the amiable aspect of a fault-an undue tolerance for indeterminate enthusiasms and vapid emotionalism-Babbitt) Failing is even less censorious than fault ...

Online dictionaries and encyclopedias with entries for appreciativeness

The value of this 16-letter word is 25 points. Since it has more than 15 letters, it can be played on Super Scrabble board only.

Go to the thesaurus of appreciativeness to find many related words and phrases!