Definition of the noun ascii

What does ascii mean as a name of something?

Other definitions of ascii

What does ascii also mean?

ASCII: The Amsterdam Subversive Center for Information Interchange was a squatted communication laboratory in the Dutch city of Amsterdam. The first incarnation was formed in 1999 and based at the Herengracht. The lab then moved to the following locations: Jodenbreestraat, Kinkerstraat, Kostverlorenkade, Wibautstraat and Javastraat.

Ascii a.k.a. Keith Fullerton Whitman is an American electronic musician who has recorded albums influenced by many genres, including ambient music, drill and bass, and krautrock. He records and performs using many aliases, of which the best-known is Hrvatski. His works under the Hrvatski moniker mainly fell under the 'drill and bass' subgenre of IDM, and were his main musical outlet in the mid-to-late 1990s. Other solo aliases include ASCIII and Anonymous. Keith was in many bands in the 1990s, including El-Ron, The Liver Sadness, Sheket/Trabant, The Finger Lakes and Gai/Jin.

"ascii" is a musical EP of Pinback.

ascii is a text encoding.

Printed dictionaries and other books with definitions for Ascii

A Guide for Electronic Filing with the SEC by Charles H. Rider

ASCII refers to the defined character set for data representation on nearly all personal and mainframe computers. The ASCII standard enables information to be shared among computer systems. ASCII is a character set, although most refer to it ...

ASCII is the oldest text encoding still in widespread use. It assigns English letters, numbers, punctuation, and terminal control codes (things like "backspace," " newline," "terminal bell," etc.) in numbers 0 to 127, the range allowed by 7 bits.

Easily transferred over networks, ASCII is a plain, unadorned text without style or font specifications.

by Phillip Crowder, David A. Crowder

ASCII is a binary representation of the letters, numbers, and special characters you see on your keyboard (plus a few more relating to carriage return, line placements, and various beeps). Each of these letters and numbers can be encoded in ...

Tools and Techniques for Engineering Wizardry by Jeremy Blum

Decimal-coded ASCII is the default format. The Serial.print()andSerial.println() functions have an optional second argument that specifies the print format. Table 6-1 includes examples of how you would print the same data in various formats ...

by Kenneth B. Ackerman

ASCII is a standard computer code - in many ways like the GMA pallet standards. Figure 48-1 lists some of the commonly used terms and what they describe.” Portable Data Collection Terminals Recently technology has provided a number of ...

American Standard Code for Information Interchange (ASCII) An encoding method for alphanumeric data commonly used for text files. ASCII is a common code, but because it lacks characters used ...

ASCII is a numeric code. ASCII is an 8-bit code. Hollerith is a 7-bit code. 85. Parity testing is done by adding a small amount .

ASCII is a small character set consisting of a mere 128 characters: uppercase and lowercase A to Z, numbers 0 to 9, a handful of arithmetic and punctuation characters, space, tab, and special “control” characters for things like creating line ...

Several years ago, the ASCII standard defined 128 basic character codes for standardized use on any computer platform. This included the character code 65 for the letter "A", the code 32 for a space, the code 1 3 for a carriage return, and so ...

ASCII associates a function, "new line" (NL) with the LF character for devices that do not require both symbols. Thus, the sequence CR-LF could produce the same result on devices of both classes. EXTENSION TECHNIQUES (X3.41) In 1974 ...

The International Dictionary of Data Communications (1998)

by Robert A. Saigh

An ASCII data file, in contrast, contains just the values, not the variable definition information.

ASCII (American Standard Code for Information Interchange) Pronounced "ass- key." It is a binary code for data that is used in communications, mostly in minicomputers and all personal computers. ASCII is a 7-bit code providing 128 possible ...

Online dictionaries and encyclopedias with entries for Ascii 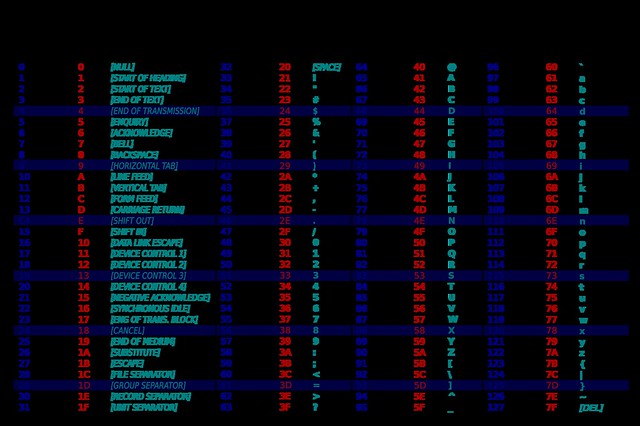