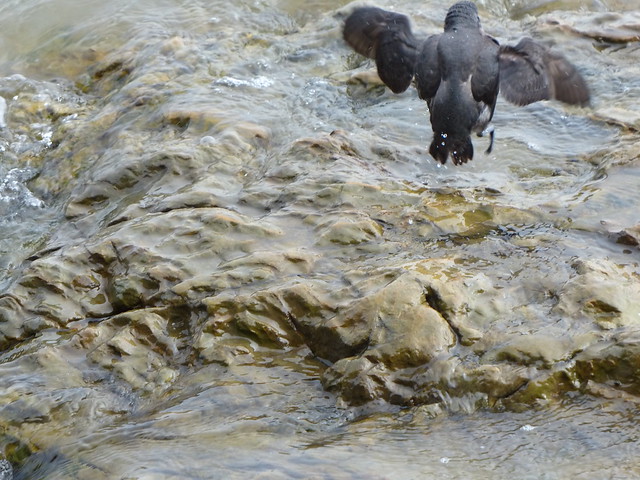 Definition of the noun auklet

What does auklet mean as a name of something?

Printed dictionaries and other books with definitions for auklet

The rhinoceros auklet is a pelagic migratory breeding seabird common along most of the West Coast in fall and winter. It breeds colonially in burrows in maritime and inland grassy slopes, occasionally on flat ground on forest floors, usually ...

Cassin's Auklet is a colonial nesting bird that lays its eggs in burrows of its own construction and returns to the nesting colony only under cover of darkness. They return to breeding colonies on the Farallon Islands in December, with first eggs ...

The Auklet is a fairly abundant species on the island and prefers the lower portions on which to nest. Here it is found in deserted rabbit burrows beneath the rocks and in all probability it often excavates its own burrows. It also nests about ...

Field Guide to Birds of the Northern California Coast (2014)

in Northern California, and distributed broadly from Alaska to Baja, Cassin's Auklet is a bird rarely seen from shore. This uniformly mouse-gray alcid is chunky , slightly larger than the Ancient Murrelet, and noticeably smaller than the ...

The rhinoceros auklet is a sootygrey seabird that nests in burrows, often on islands, along the coasts of the northern Pacific. Figure 6.1. Thisfigure shows the daily weight lossofcommon murre parents of asingle offspring. Parents ofasonlost ...

Cassin's Auklet is a small, short- necked auklet with adullplumage that remains fairly uniformatallagesandseasons . Its flight appears weak; it usually takes off from seawith difficulty at the approach ...

Cerorhinca The Holarctic Rhinoceros Auklet is a mid-latitude (Latitude Category D) specialist that breeds in the Eastern Palearctic and is partially migratory. Fratercula The three species of puffins breed in the Palearctic. The Atlantic Puffin F.

The gregarious Cassin's auklet is a dark—feathered seabird that mainly eats krill —like zooplankton. This plankton preference means its fate is more directly tied to ocean productivity than that of tufted puffins and rhinoceros auklets (larger ...

Cassin's Auklet (Ptychoramphus aleuticuslnCassins' auklet is the most abundant of the marine birds found breeding on the Channel Islands, where it is a year- round resident. Some 23,000 auklets nest in this area; however, the largest colony ...

The rhinoceros auklet is a bird of the northern Pacific Ocean, which breeds along the coast from California to Alaska and then down the coast of Asia to Japan and Korea. Although still a common bird in Alaska, it was extirpated in California in ...

Small alcids like crested and least auklet nest in crevices in rock taluses, raising one chick per year. Skuas and most gulls nest in open tundra and raise one to three chicks per year, feeding the chicks in the vicinity of the nest. Loons nest on ...

On Rat Island in the western Aleutians of Alaska, for example, rat predation on eggs and chicks led to the extirpation of such burrow-nesting seabirds as Cassin's Auklet (Ptychorampus aleuticus), Tufted Puffin (Fratercula cirrhata), and Storm ...

Online dictionaries and encyclopedias with entries for auklet

Video shows what auklet means. Any of several small seabirds in the genera Aethia, Cerorhinca and Ptychoramphus of the auk family Alcidae.. Auklet Meaning.