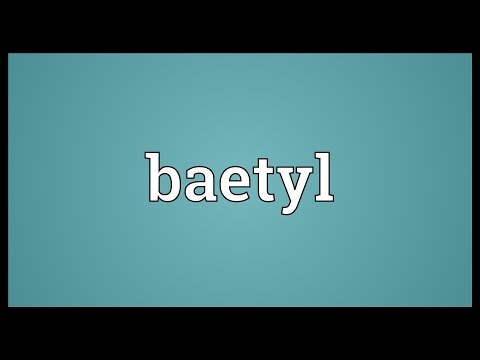 Definition of the noun baetyl

What does baetyl mean as a name of something?

Printed dictionaries and other books with definitions for baetyl

A baetyl is a nonrepresentational depiction of a ...

BAETULUS (BAETYL) In antiquity, ameteorite or similar stone venerated by men and thought to ...

The Century Dictionary and Cyclopedia: The Century dictionary ... prepared under the superintendence of William Dwight Whitney (1903)

Online dictionaries and encyclopedias with entries for baetyl

Video shows what baetyl means. (Antiquity) a meteorite or similar-looking rough stone thought to be of divine origin and worshipped as sacred.. Baetyl Meaning.

See also the blanagrams of baetyl!

Go to the pronunciation of baetyl to learn how to say it correctly!