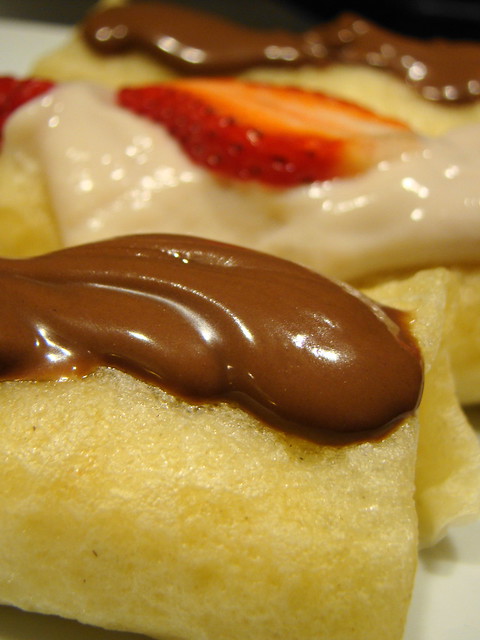 Definition of the noun blintz

What does blintz mean as a name of something?

Alternative definition of the noun blintz

Printed dictionaries and other books with definitions for Blintz

The Everything Judaism Book (2002)

Looking a bit like an egg roll, a blintz is a flat pancake rolled around sweetened cottage cheese, mashed potatoes, jam, or fresh fruit. Blintzes are frequently accompanied with sour cream or applesauce. Other common Jewish food items ...

But the blintz is the go-to food for many people on Shavuot. THE BIRTH OF BLINTZES Many countries claim to be the originators of blintzes. There were many types of filled pancakes in central Europe. They were called “palacsinta” in Hungary ...

Blintz/Blini (Russia) Blintz is a yeast fermented thin pancake, somewhat similar to a crepe, although yeast is not used in crepe preparation. Ciabatta (Italy) Ciabatta is an Italian white bread made from wheat flour and yeast. The loaf is ...

Blintz. blanket Trust your intuition for a few days and simplify your life. Within three days, the person you most desire will also come to you for a very mutually fulfilling sexual encounter. wet blanket Someone who loves you but is not in verbal ...

A Guide to the Use of Jewish Terms by Sol Steinmetz

BLINTZ. Blintzes are one of the many joys of Jewish cooking – tender pancakes filled with cottage cheese, then fried.They are served hot with sugar, cinnamon and. blintz. 49. BLANQUETTE ...

Online dictionaries and encyclopedias with entries for Blintz

Go to the thesaurus of Blintz to find many related words and phrases!