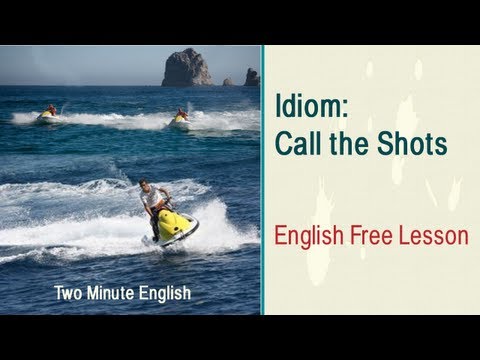 Call
the
Shots
is an acrostic for cts.

Definition of the verb call the shots

What does call the shots mean as a doing phrase?

Alternative definition of the verb call the shots

Printed dictionaries and other books with definitions for Call the Shots

A Dictionary of Confusable Phrases (2010)

More Than 10,000 Idioms and Collocations by Yuri Dolgopolov

call the shots (or tune) be in charge or command, rule the roost, be in the driver's seat, be in the saddle, be at ...

call the shots to be the person who controls or organizes a situation 0 You're the boss here - you get to call the shots. PHRASAL VERBS with call • call back ( someone) [M] to telephone someone who has telephoned you, often to answer a ...

The New Partridge Dictionary of Slang and Unconventional English: A-I (2006)

Online dictionaries and encyclopedias with entries for Call the Shots

Photos about Call the Shots

If you need images about Call the Shots for an article or a report, you can download stock photos at a very small price:

See also the pronunciation examples of Call the Shots!

Quotes about Call the Shots

I can tell you this: If I'm ever in a position to call the shots, I'm not going to rush to send somebody else's kids into a war. (George H. W. Bush)
more quotes...

Go to the usage examples of Call the Shots to see it in context!