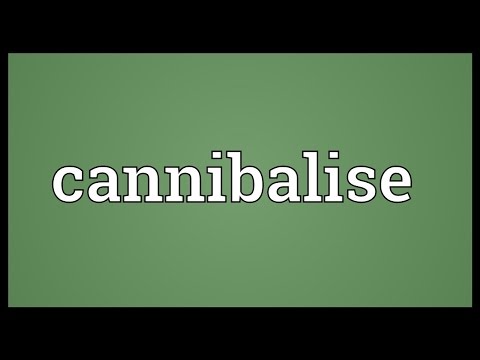 Definition of the verb cannibalise

What does cannibalise mean as a doing word?

Alternative definition of the verb cannibalise

Printed dictionaries and other books with definitions for Cannibalise

Cannibalise means to remove serviceable parts from one item of equipment in order to install them on another item of equipment. Contractor-acquired property means property acquired, fabricated, or otherwise provided by the contractor for ...

cannibalise To strip serviceable components from one or more (usually nonfunctioning) equipments in order to build one that works. capacitance (C) A property of ...

Artists such as Mento, Poco, Kumina, and Revival began to cannibalise ...

Word Family cannibalism noun the practice of eating the flesh of one's own species; cannibalistic adjective; cannibalize, cannibalise verb to take 138 canopy parts from damaged machinery for use in the repair of other equipment. [Spanish ...

cannibalise or -ize v(tr; coll) to take parts from (a machine, vehicle, etc.) for use in repairing another. cannon n cannon or cannons 1 (hist) a large gun mounted on ...

cannibalize (or cannibalise) v. (cannibalizes, cannibalizing, cannibalized) use a machine as a source of spare parts for others. cannon n. (pl. cannon or cannons) 1 a large, ...

cannibalize (or cannibalise) v. (cannibalizes, cannibalizing, cannibalized) use a machine as a source of spare parts for others. cannon n. (pl. cannon or cannons) 1 a large, ...

cannibalize (UK also cannibalise) /'ka2n1b91a1z/ verb [T] 1 MARKETING, c0MMERcE to cause a reduction in the sales of an existing product or service by ...

cannibalize (also cannibalise) 7verb [with obj.] 1 use (a machine) as a source of spare ...

Online dictionaries and encyclopedias with entries for Cannibalise

Video shows what cannibalise means. To eat (parts of) another of one's own species.. To remove parts of (a machine, etc) for use in other similar machines.

The value of this 11-letter word is 15 points, but it's not an accepted word in the Official Scrabble Players Dictionary.