Distribution of usage frequency for the most common synonyms of the noun cellar:

The word cellar is considered to be an easy one, according to the Dale-Chall word list, which includes 3000 words that all fourth-grade American students should know and understand.

Definition of the noun cellar

What does cellar mean as a name of something?

Alternative definition of the noun cellar

Definition of the verb cellar

What does cellar mean as a doing word?

"Cellar" is a 2010 drama film directed and written by Steve Staso.

"Cellar" is a musical album of The Great Park.

There are other places with in their name, like The Cellar Door, The Wine Cellar.

Phrases starting with the word Cellar:

Phrases ending with the word Cellar:

Printed dictionaries and other books with definitions for Cellar

22 Steps to Becoming a Master Storyteller by John Truby

The cellar is the natural workplace of the criminal and the revolutionary. This technique is used in Notes from the...

BUYER & CELLAR is an outrageous comedy about the price of fame, the cost of things, and the oddest of odd jobs.

by Bruce B. Janz

and in so doing it 'partakes of subterranean force'; descending into the cellar is a way to relive 'the primitivity and the...

A Guide for Spiritual Travelers in North Carolina (2005)

The Devil's Cellar is a cave on the north end of the mountain. Above the cave is a chasm formed by a large buttress. This gully is great for rock climbing with or without equipment. The cave is beneath the chasm. If you climb down, just hope the ...

The Complete Guide to Your New Root Cellar (2011)

Your root cellar is a constantly changing, natural organism that will require occasional attention and upkeep. You will not have to dedicate a large amount of time to maintenance, but you should keep a watchful eye on problems and address ...

The Moyers' root cellar is a 5-by-5-foot dirt-floored area under the toolshed. Concrete blocks nine courses high line the walls. The joists supporting the root cellar ceiling (which is the floor of the toolshed) are pine two-by-sixes set 16 inches on ...

Actual description of a popular campus hangout that we found online: “The Root Cellar is a volunteer, collectivelyrun, non-hierarchical space in New York's Hudson Valley. We're located in Annandale-on-Hudson, NY, at Bard College in the ...

Thus the cellar is the id, the dark ground of being, the place of the furnace that fuels the passions. The living room is the ego, the public and social self. The attic is the superego, dream place for the poet and the introspective child.

Buying and selecting wines for your cellar is the most fun and interesting part of wine appreciation — besides drinking it, of course! You've done all your studying and reading on the wines you like, and now you go out to your favorite wine ...

A root cellar is a simple way to preserve food without processing it or using any electricity or fuel. An underground storage space provides the right temperature and humidity level for many fruits (such as apples, oranges, or pears) and root ...

CELLAR. A carefully organized cellar must be both fresh and dry. The air must penetrate it only feebly. The sun, whose rays are worthy of man's homage outside , and which was first adored by the peoples of the earth as the god of the universe ...

cellar The position in league or divisional standings held by the team with the worst won-lost record. Syn. basement. cellar championship A facetious term for the efforts of two or more teams to ...

CELLAR relative situation. Thus, in an English-basement house, the front portion of the lowest, nearly subterranean, story will frequently be without windows, and used merely for storage of fuel and the like, and will therefore be referred to as a ...

The household encyclopædia; or, Family dictionary of everything connected with housekeeping and domestic medicine, by an association of heads of families and men of science (1858)

be properly ventilated, and, as repose is a grand requisite in the preservation of wines, a cellar under the house ought always to be preferred to one under the street ; it must be kept constantly clean, free from cobwebs, and care must be taken ...

Online dictionaries and encyclopedias with entries for Cellar 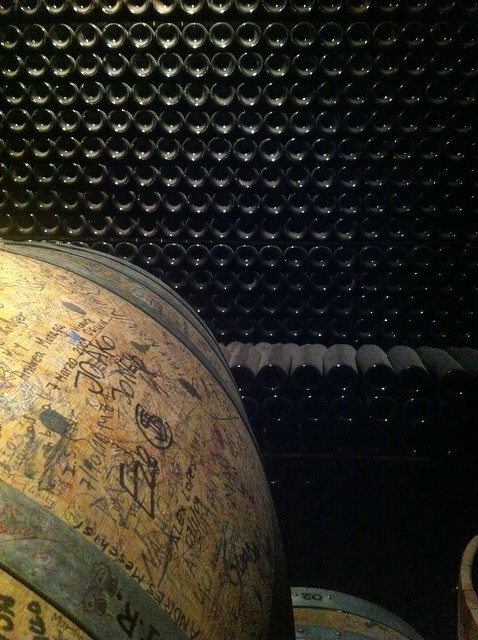 Video shows what cellar means. An enclosed underground space, often under a building; used for storage or shelter.. A wine collection, especially when stored ...

I came upstairs into the world; for I was born in a cellar. (William Congreve)
more quotes about cellar...

See also the blanagrams of Cellar!

Go to the usage examples of Cellar to see it in context!