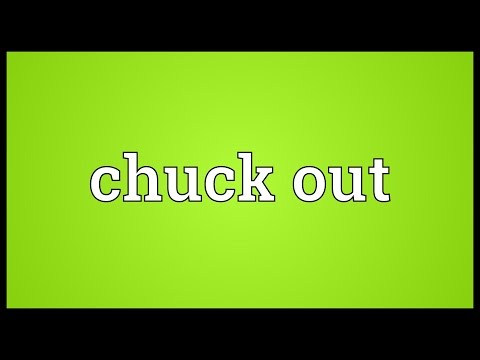 Definition of the verb chuck out

What does chuck out mean as a doing phrase?

Alternative definition of the verb chuck out

Printed dictionaries and other books with definitions for chuck out

chuck away, chuck out, give it the chuck (to get rid of, throw somewhere else). chuddy Chewing gum, considered casual and usually juvenile. Originally chuddygum, it was common in New Zealand throughout the 20th ...

chuck out ( of) (intransitive, adverb, preposition) Informal 1 dismiss or expel someone from a company, school, club, etc., especially because of bad work or behaviour: They ...

Chew up Chicken out Chill out Chime in Chip away at Chip in Choose up Chop down Chop up Chuck away/Chuck out Chuck in Chuck up Churn out Clag up Clam up Clamp down on Claw back Clean out Clean something up cut into small ...

¦ Beale, 1984 ¦ Nigel Foster, The Making of a Royal Marine Commando, 1987 chuck out verb to eject someone forcibly; to get rid.

Online dictionaries and encyclopedias with entries for chuck out

Usage statistics about chuck out

Distribution of usage frequency for the most common synonyms of the verb chuck out:

Video about chuck out

Video shows what chuck out means. To discard, to dispose of (something). To drive out, to turn out (somebody). Chuck out Meaning. How to pronounce ...