Distribution of usage frequency for the most common synonyms of the noun climbing:

Definition of the noun climbing

What does climbing mean as a name of something?

Alternative definition of the noun climbing

Specialised definition of the noun climbing

form of upward locomotion where the hands are used for support due to the steepness of the terrain or of the equipment that is to be mastered (mountain climbing). Climbing involves total body movement and serves as an exercise for strengthening the entire body when using climbing ropes and climbing bars within the framework of physical education. Hands and feet are released alternately from the equipment in order to take on a closed position at or around the equipment after gaining altitude. The simplest form of climbing on equipment is climbing up a latter or wall bars, the most difficult form is over-handing. (Herbert Haag & Gerald Haag. 2003. Dictionary. Sport, Physical Education, Sport Science. Kiel, Institut für Sport und Sportwissenschaften)

Definition of the adjective climbing

What does climbing mean as an attribute of a noun?

Climbing is a major US-based rock climbing magazine first published in 1970. In 2007, it was bought by Skram Media, the publisher of Urban Climber Magazine.

Phrases starting with the word Climbing:

Phrases ending with the word Climbing:

View more phrases with the word Climbing in thesaurus!

Printed dictionaries and other books with definitions for Climbing

Rock climbing is a sport in which participants climb up or across natural rock formations or manmade rock walls with the goal ...

The Path of Greatest Advantage (2010)

A self-guided kit to enhance the power of your will by William J. Dubin, PhD

Mountain climbing is a metaphor for a difficult but surmountable challenge. It would be foolhardy to attempt a serious climb without proper preparation or without the understanding that you will probably encounter physical discomfort and ...

Physics for Scientists and Engineers Volume 1 and 2 (2016)

Rock climbing is a sport in which participants climb up or across na rock formations or artificial rock walls.

the quickes possible time or the farthest along an ever increasingly harder route Climbing is the activity of using one's hands and feet ...

Physics for Scientists and Engineers with Modern Physics (2016)

In ge rocks are ofthree types, namely, igneous, sedimentary, and metam Rock climbing is a sport in which participants...

in the quickes possible time or the farthest along an ever increasingly harder route Climbing is the activity of using one's ...

Herbs or shrubs, often climbing, with alternate, stipulate or ...

A Manual and Dictionary of the Flowering Plants and Ferns: Outlines of the morphology, natural history, classification, geographical distribution and economic uses of the phanerogams and ferns (1897)

Climbing Plants. Here again we have a group founded upon a biological peculiarity and including plants of very many different families of flowering plants and ferns. They occur in all parts of the globe, but abound especially in tropical forests, ...

A Manual and Dictionary of the Flowering Plants and Ferns (1897)

Climbing Plants. Here again we have a group founded upbn a biological peculiarity and including plants of very many different families of flowering plants and ferns. They occur in all parts of the globe, but abound especially in tropical forests, ...

An A to Z Compendium of Over 2,250 Terms, Concepts, Ideas, and People by Frederic Hartemann, Robert Hauptman

Climbing fibers carry somatosensory information from the inferior olive to deep nuclear cells and Purkinje neurons in the cerebellar cortex. Purkinje neurons have a distinctive morphology due to an extensive and planar dendritic arbor ...

Online dictionaries and encyclopedias with entries for Climbing 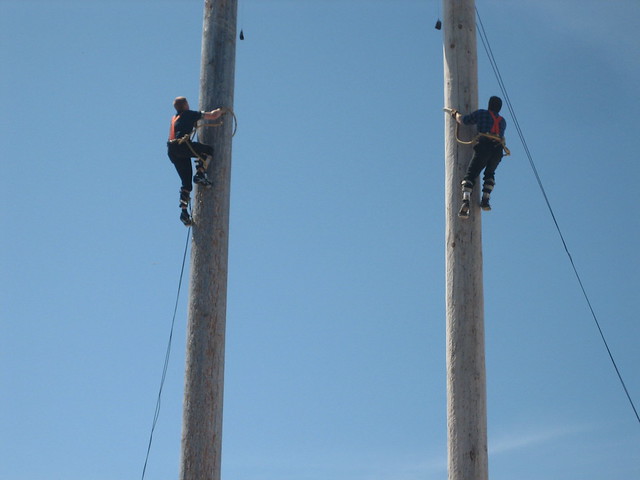 I've done archery for about six weeks, and rock climbing, tree climbing - and combat, running and vaulting. But also yoga and things like that, to stay catlike! (Jennifer Lawrence)
more quotes about climbing...

Go to the usage examples of Climbing to see it in context!