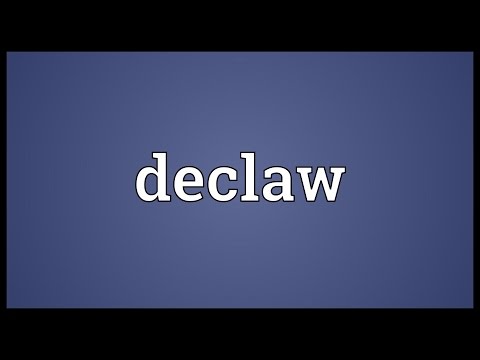 Definition of the verb declaw

What does declaw mean as a doing word?

Printed dictionaries and other books with definitions for Declaw

Lessons in Eskrima by Rad Maningas

xxiii Declaw is a general term for strikes that are directed to parts of the hand such as fingertips and nails, knuckles of the fingers, the thumb, back of the hand, and the wrist. Stick blows to these areas cause more pain and injury because these ...

DECLAW, SAINT (fl. 600-650), bishop of Ardmore, co. Waterford ; became lu Gaul po&wssed of the •ituibliin,' a supernatural gift, which was possibly a black altar-cross ; crossed to Ireland in a ship which was miraculously supplied to him ...

declaw /diːˈklɔː/ v. remove the claws from (an animal, typically a cat). declension /dɪˈklɛnʃ(ə)n/ n. 1 Grammar the variation of the form of a noun, pronoun, or adjective, by which its grammatical case, number ...

the Congress attempted to declaw 649 PALAU.

Online dictionaries and encyclopedias with entries for Declaw

Video shows what declaw means. To surgically remove the claws from.. To make harmless.. Declaw Meaning. How to pronounce, definition audio dictionary.