Demolish appears in the following palindromes (phrases that read the same backward as forward):

Definition of the verb demolish

What does demolish mean as a doing word?

Alternative definition of the verb demolish

"Demolish" is a composition.

Printed dictionaries and other books with definitions for Demolish

The first and perhaps most pernicious myth on identity that one should endeavour to demolish is that of religious exclusivity, of religious purity.

the term demolish is a member of the source domain BUILDINGS. In virtue of its connection to items such as attack, shoot down (arguments), etc., it might be argued ...

An Anthology of Sources and Documents by Vassiliki Kolocotroni

The first illusion to demolish is the division of women into two classes: the mistress and the mother. Every well balanced and developed woman knows that no such division exists, that Nature has endowed the Complete Woman with a faculty ...

The decision to demolish is a function both of pragmatics and of ideology. It is arguably more cost effective to shift the responsibility for the construction, maintenance and operation of subsidized housing to the private sectorvi. But from an ...

A Dictionary of the Panjábí Language (1854)

Demolishing; the price of demolishing. agrést dhawá, uná, v. a. To cause to be carried; to cause to be thrown down. Rār qhá, s. f. Falling, demolition, destruction, ruin; sighing; Kät fizers or *ext, to throw down, to demolish, ...

Online dictionaries and encyclopedias with entries for Demolish

Distribution of usage frequency for the most common synonyms of the verb demolish: 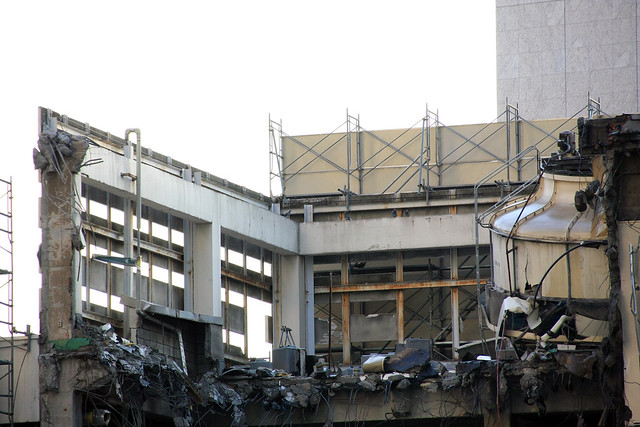 I demolish my bridges behind me - then there is no choice but forward. (Fridtjof Nansen)
more quotes about demolish...