Definition of the noun dinosaur

What does dinosaur mean as a name of something?

Alternative definition of the noun dinosaur

Phrases starting with the word Dinosaur:

Phrases ending with the word Dinosaur:

Printed dictionaries and other books with definitions for Dinosaur

Disney/Pixar The Good Dinosaur is a humorous and exciting original film about Arlo, a lively Apatosaurus with a big heart.

Boo's Dinosaur is a 2007 Bank Street - Best Children's Book of the Year.

Riddle of the Feathered Dragons (2012)

And Other Weird Stories by H. P. Lovecraft

Dinosaur is the name ...

One Encylopedia, a World of Prehistoric Knowledge by Michael Benton, Mike Benton

Dinosaur facts About 1,500 species of dinosaurs have been named since 1824, and a new dinosaur is named every two to three weeks. Many of the 1 9th- century identifications turn out to be incorrect or are based on remains that cannot be ...

Materials needed White construction paper — 9" x 12" White posterboard Small dinosaur cutouts or stickers Popsicle or craft sticks Paste or glue Crayons What to do 1. From posterboard, prepare patterns of a 7" x 4 1/2" egg for the chddren to ...

Dinosaur. Song: Trioeratops. 3+. Materials needed None needed Whaf to do 1 . Add this song to your collection of songs about dinosaurs and sing with the children during circle time. "Triceratops" (Tune: "Yankee Doodle Dandy") Triceratops, ...

The Cabazon Dinosaurs are two immense dinosaur statues in Cabazon, California. The enormously popular roadside attraction, touted as the world's largest dinosaurs, can't be missed while traveling along Interstate 10, the fourth longest ...

The Giant Encyclopedia of Transition Activities for Children 3 to 6 : Over 600 Activities Created by Teachers for Teachers (2005)

Fingerplays, Songs, and Rhymes: Use dinosaur stick puppets or act out this favorite rhyme with a little twist: There were ten in the bed and the BIG one said, " Roll over, roll over." They all rolled over and one fell out... Science: Make " dinosaur ...

dinosaur dinosaurs noun one of a group of land reptiles that lived on Earth, at different times, for more than 150 million years. The last dinosaurs died out 65 million years ago. Triceratops □ say try-ser-uh-tops brow horn tail spikes ...

One of the photographs which Wilford passed around showed a drawing of “ cavemen attacking a dinosaur.” That was Wilford's mistake! Human beings did not live on earth at the same time that the dinosaurs did. The first man did not appear ...

DINOSAUR: ICHTHYOSAURUS Blackie, John Stuart 1809–95 Scottish scholar Behold a strange monster our wonder engages, If dolphin or lizard your wit may defy, Some thirty feet long on the shore of Lyme-Regis With a saw for a jaw, and a ...

Online dictionaries and encyclopedias with entries for Dinosaur 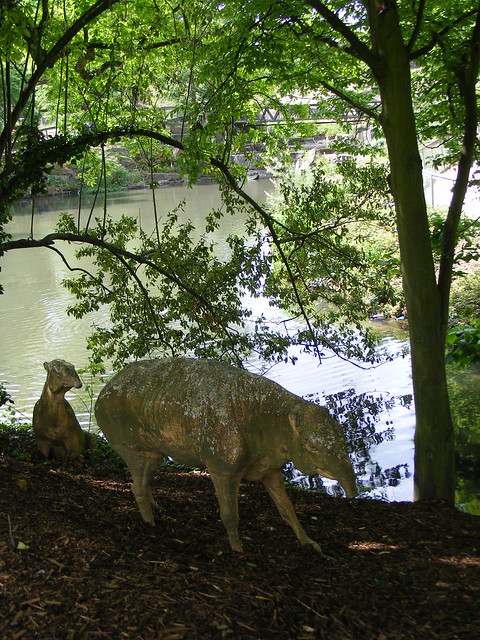 I heard that Jesus had a pet dinosaur. Evolution must be a myth then. (John Bacon)
more quotes about dinosaur...