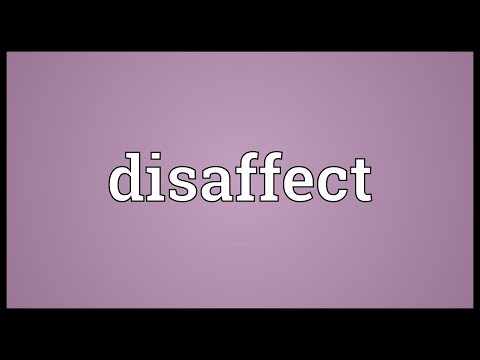 Definition of the verb disaffect

What does disaffect mean as a doing word?

Alternative definition of the verb disaffect

Disaffect is a musical group.

Printed dictionaries and other books with definitions for Disaffect

A Dictionary of the English Language (1832)

Intended to Exhibit: I. The Origin and the Affinities of Every English Word ... II. The Orthography and the Pronunciation of Words ... III. Accurate and Discriminating Definitions of Technical and Scientific Terms ... To which are Prefixed an Introductory Dissertation on the Origin, History, and Connection of the Languages of Western Asia and of Europe and a Concise Grammar, Philosophical and Practical, of the English Language by Noah Webster

DISAFFECT, v. t. [dis and affect.] To alienate affection; to make less friendly to ; to make less faithful to a person, party or cause, or less zealous to support it; to make discontented or unfriendly; as, an attempt was made to disaffect the army. 2 .

A dictionary of the principal languages spoken in the Bengal Presidency, English, Bángálí and Hindústaní (1837)

DISABUSED DiSAFFECT DISAGREE po, to burst.] A bursting or rending asunder . [See DisRUPTION.] DIS, a prefix or inseparable preposition, from the Latin, whence Fr. des, Sp. dis, and de may in some instances be the same word contracted ...

To which is Added, a Concise Classical Dictionary by Robert Sullivan

Online dictionaries and encyclopedias with entries for Disaffect

Video shows what disaffect means. To cause a loss of affection, sympathy or loyalty, to alienate or estrange. Disaffect Meaning. How to pronounce, definition ...

The value of this 9-letter word is 18 points. It is included in the first and second editions of the Official Scrabble Players Dictionary.

Go to the usage examples of Disaffect to see it in context!