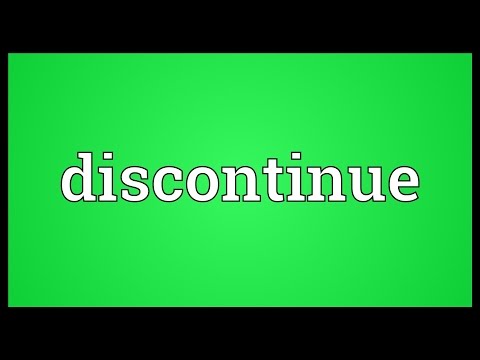 Definition of the verb discontinue

What does discontinue mean as a doing word?

Alternative definition of the verb discontinue

Printed dictionaries and other books with definitions for discontinue

The English Master; Or, Student's Guide to Reasoning and Composition (1829)

Exhibiting an Analytical View of the English Language, of the Human Mind, and of the Principles of Fine Writing by William Banks

To DISCONTINUE, е. я. [discontinuer. Fr.] To lose the cohesion of parts. Bacon. To lose an established custom or right. J er. To DISCONTINUE.

A New and Complete Law-dictionary, Or, General Abridgment of the Law (1783)

On a More Extensive Plan Than Any Law-dictionary Hitherto Published : Containing Not Only the Explanation of the Terms, But Also the Law Itself, Both with Regard to Theory and Practice ... by Timothy Cunningham

—A policy of life insurance provided that after two annual payments, should it be desired to discontinue the policy, the company was to issue “a paid-up policy for as many tenths ...

The American and English Encyclopaedia of Law (1887)

Plaintiff has absolute right to discontinue at common law before or after issue joined and without leave of court.5* (a) Termination.

To DISCONTINUE, & 's kön-tin'-ti. v.n.To lose the cohesion of parts; to lose an established or prescriptive custom. To DISCONTINUE, dis-kön-tin'-É. v. a. To leave off, to cease any pračtice or habit. DISCONTINUITY, dis-kön-ti-nā'- H-ty. s.

Online dictionaries and encyclopedias with entries for discontinue

Distribution of usage frequency for the most common synonyms of the verb discontinue:

Comparison of usage frequency between the verb discontinue and its most common antonym:

If you need images about discontinue for an article or a report, you can download stock photos at a very small price:

Video shows what discontinue means. To interrupt the continuance of; to put an end to, especially as regards commercial productions; to stop producing, making ...

Snap, pop, hip hop.
Nonstop!
Have you had enough?

Much of what I've laid,
Has still been untouched.

I could discontinue this,
And leave.

Or stand silently in a corner,
To watch.
But I am too pen busy! (Lawrence S. Pertillar)
more quotes about discontinue...