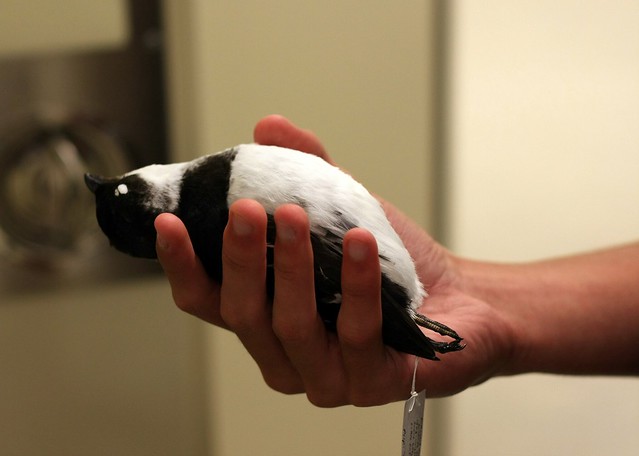 Definition of the noun dovekie

What does dovekie mean as a name of something?

Alternative definition of the noun dovekie

Printed dictionaries and other books with definitions for dovekie

Dovekie Alle alle Also known as the Little Auk, the Dovekie is a bird of the high Arctic. Most Dovekies breed in Greenland in large, noisy, crowded colonies, but some breed in northeastern Canada, and others on a few islands in the Bering Sea ...

The dovekie is a species that has been observed in the off -shore waters of or in the vicinity of the study area during every month of the year, ...

Containing a Key for Each Season and Short Descriptions of Over Two Hundred and Fifty Species, with Particular Reference to Their Appearance in the Field by Ralph Hoffmann

The Dovekie is an irregular winter visitant as far south as the New Jersey coast. DOVEKIE. Alle alle 8.00 Ad. in winter and Im. — Upper parts black; under parts white; back here and there marked with white ; bill short, black. The Dovekie, or ...

The dovekie is a Northern bird, properly belonging to coast regions, but sometimes taken here. For occasional visitors also are two of the three New England mergansers — the American and the hooded. Among the many varieties of ducks ...

white collar at back of head dark crown dark back white triangle on side of breast short, dark tail white undertail A lso known widely as the Little Auk, the stocky and diminutive black-and-white Dovekie is a bird of the High Arctic.

Size:8" Season: Winter Habitat: Offshore oceanic waters Rarely seen from shore, the dovekie is a tiny seabird that inhabits the open North Atlantic and Arctic Oceans when it is not breeding on remote, rocky ...

dovekie is a fairly common but irregular visitor to the offshore waters of new Jersey during the colder months, but is rarely seen from land. when they do come close to shore, it is usually in november or december.this may be storm related or ...

The " Greenland Dove " of Arctic seamen and of some writers in the last century is the DOVEKEE or DOVEKEY (often written affectedly Dovekie), the whalers' name for what is ...

The Century Dictionary and Cyclopedia: The Century dictionary ... prepared under the superintendence of William Dwight Whitney (1903)

See Dovekie. KING-BIRD. One of the most useful and interesting of the American tyrant flycatchers {Tyrannua tyrannus). The bird is less than nine inches in ...

murres than the smaller dovekie (Alle alle), which comprise the other living members of the auk tribe Alcini. The recently (c.1860) extinct great auk (Pinguinus impennis) was also a member of the Alcini, and some ...

Including Atlas of the World and Cyclopedia of Names

dovekie, gannets, terns, cormorants, and loons. These birds feed on a variety of small fish including capelin (Mallotus villosus) and sand lance (Ammodytes spp.). The small ...

Online dictionaries and encyclopedias with entries for dovekie

Video shows what dovekie means. A small back and white seabird, of the genus Alle, of the north Atlantic, the little auk.. Dovekie Meaning. How to pronounce ...

Couldn't select: You have an error in your SQL syntax; check the manual that corresponds to your MariaDB server version for the right syntax to use near 'dovekie"" IN BOOLEAN MODE) LIMIT 1,1' at line 1