Definition of the noun dust bowl

What does dust bowl mean as a name of something?

"Dust Bowl" is a book by Donald Worster.

Printed dictionaries and other books with definitions for Dust Bowl

by Bobby A. Stewart, Terry Howell

INTRODUCTION The Dust Bowl era was the period of drought from 1931 to 1939 that was coupled with severe wind-driven soil erosion of overgrazed rangeland and soil exposed by the use of farming practices not adapted to the semiarid ...

Courtwright DUST BOWL “Dust Bowl” is the name applied to the high plains of Texas, Oklahoma, ...

Dust Bowl Empiricism However, other elements of empiricist philosophy do surface in writing about sociological method. For example, Bacon's complaint about empiricist “ants” is reflected in rather similar objections to the “mere collection” of ...

chronicled both the Dust Bowl and the resultant migrations of many affected farmers. The first major influx of farmers into the southern plains took place in the late 1800s and early 1900s. Attracted to the fertile land, ...

Encyclopedia of Politics of the American West (2013)

As a result, many average tenant farmers became “dust bowl refugees,” and headed west for jobs and survival. Many migrants already had friends or relatives who had responded to advertisements for work in Arizona's cotton fields, and ...

Hence, the Dust Bowl of the Great Plains in the 1930s was probably a hot spot, yet, today, agriculture is prosperous there. There and elsewhere, as in the West African Sahel, the Mallee of southeastern Australia, a great deal of soil may be lost ...

Online dictionaries and encyclopedias with entries for Dust Bowl 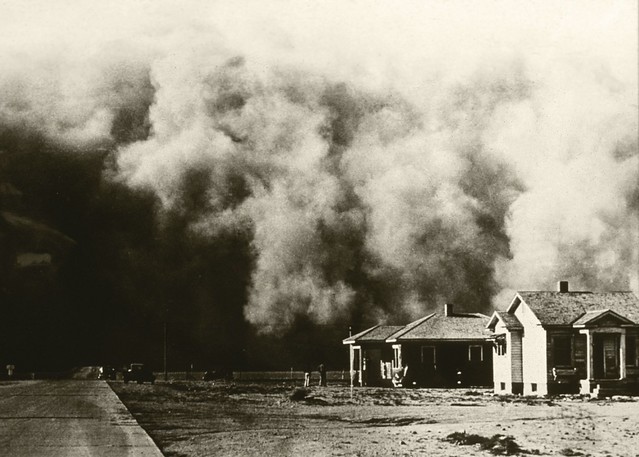 2,000 years of history cannot be wiped away so easily! !
So, learn from the truth and live;
However, the truth is also hidden from the very eyes of many!
But, at that time,
In a desolate place,
You will clean the dust bowl to hunt for food. (Edward Kofi Louis)
more quotes...

Go to the usage examples of Dust Bowl to see it in context!