Definition of the noun flying buttress

What does flying buttress mean as a name of something?

Printed dictionaries and other books with definitions for Flying buttress

A Visual Dictionary of Architecture (2011)

flying buttress An inclined bar of masonry carried on a segmental arch and transmitting an outward and downward thrustfrom a roof or vaulttoa solid ...

A flying buttress for the nasal bridge. A piece of septal cartilage may be needed to supply a replacement for the ...

See flying buttress; buttress-tower: tower seeming to function as a buttress, as on either side ofa gateway, but mostly for defence; clasping buttress (2): massive buttress, square on plan, at the corner ofa building, usually ofthe *Romanesque or ...

The flying buttress was a purely Gothic invention. Suppose a five-aisled Gothic cathedral, with buttresses outside opposite the fall of each vaulting compartment, and occupying substantially all the space between the large stained-glass ...

A Dictionary of Construction, Surveying, and Civil Engineering (2012)

flying buttress A *buttress that supports a wall at the *eaves level, associated with Gothic churches and cathedral architecture. flying Flemish bond A brickwork bond in which the ...

flying buttress A type of buttress in which no part of the buttress itself is in contact with the ground. Usually a flying buttress is a curved (sometime straight) structure of stone or concrete composition in ...

flying buttress in Gothic church architecture, a stone buttress designed to take the lateral thrust of a roof, vault, or wall; it consists of a slender bar of ...

Online dictionaries and encyclopedias with entries for Flying buttress 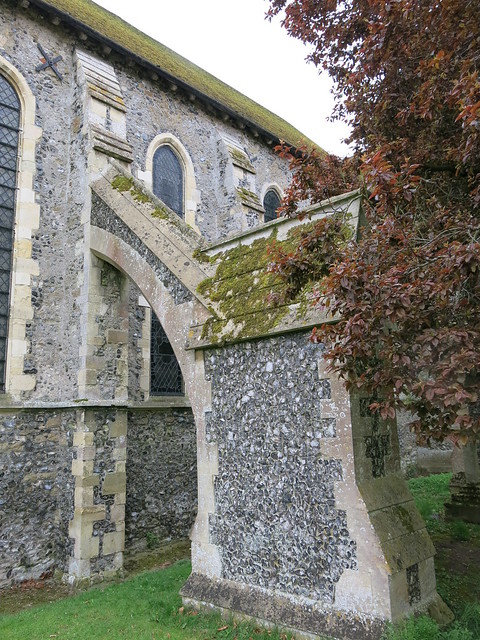 Go to the usage examples of Flying buttress to see it in context!