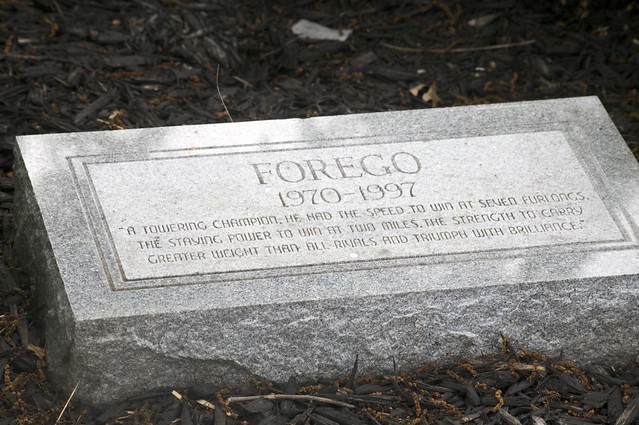 Definition of the verb forego

What does forego mean as a doing word?

Alternative definition of the verb forego

Forego was an American Thoroughbred racehorse that won eight Eclipse Awards including Horse of the Year, Champion Handicap Horse and Champion Sprinter.

Printed dictionaries and other books with definitions for Forego

From Edinburgh to the Antarctic (2012)

An Artist's Notes and Sketches During the Dundee Antarctic Expedition of 1892-93 by William Gordon Burn Murdoch, W. S. Bruce

The harpooneers are busy splicing foregoes to the ring that travels on the shaft of the harpoon. The forego is a length of six fathoms of soft, pliable, two-inch rope, so pliable that it ...

Deciding to Forego is a rich compendium of information, thoughtful argumentation, and useful advice. It became the most successful of the Commission's reports and had a significant impact on practice, policy, and the field of bioethics.

Misadventures in the English Language (2016)

To forego is a rarely used word meaning 'to go before'; its past participle foregone often appears in the phrase a foregone conclusion, an inevitable one, one that has already been made. Forgo comes from an Old English word meaning 'to do ...

Forego/Forgo— Forego means to go before; forgo means to go without. Webster's New World Dictionary lists forego as a variant spelling of forgo, but not the other way around. Keep them separate, but don't argue with those who use the one ...

One traditional wedding moment Piti and eseline will forego is the cutting and serving of the wedding cake, actually three cakes. They are stacked one above the other on a wooden stand that has been wrapped in aluminum foil to make it look ...

In which the Words are Deduced from Their Originals; and Illustrated in Their Different Significations, by Examples from the Best Writers: Together with a History of the Language, and an English Grammar by Samuel Johnson

forego; forgo. The former, as suggested by the prefix, means "to go before." The latter is the term meaning "to do without; to pass up voluntarily; waive; renounce." One of the most persistent errors in legal and other writing is the ...

forego, forgo. Commonly confused, as here: “The independents must destroy all documents obtained during the case and agree to forego any further litigation against the chains for three years” (International Herald Tribune). Forego means to ...

Online dictionaries and encyclopedias with entries for Forego

Distribution of usage frequency for the most common synonyms of the verb forego:

Video shows what forego means. To precede, to go before.. forego pronunciation. How to pronounce, definition by Wiktionary dictionary. forego meaning.

See first that the design is wise and just: that ascertained, pursue it resolutely; do not for one repulse forego the purpose that you resolved to effect. (William Shakespeare)
more quotes about forego...

See also the blanagrams of Forego!

Go to the usage examples of Forego to see it in context!