Definition of the noun fulmar

What does fulmar mean as a name of something?

Alternative definition of the noun fulmar

Phrases starting with the word Fulmar:

Phrases ending with the word Fulmar:

Printed encyclopedias and other books with definitions for Fulmar

Fulmarus glacialis The Fulmar is the most common and widespread of our breeding tubenoses, and is also the only one that nests in open situations and comes to its nest by day. It is therefore the easiest member of the group to see ...

The widely distributed fulmar is a species of petrel with a wing-span of a metre or more, and a remarkable life span of about 70 years. Fulmars breed extensively on sea cliffs in Svalbard, Greenland, the Canadian Arctic Archipelago and the ...

The Fulmar is a very greedy bird. When the offal of some big catch — whale or seal — is thrown overboard in ...

Northern Fulmar is a rare, but regular, visitor at this season. Northern Gannet is common, as is Black-legged Kittiwake. The few records of Great Skua for New Jersey have been on pelagic trips from November to March. Winter is also the ...

The Fulmar is a very greedy bird. When the offal of some big catch — whale or seal — is thrown overboard in ...

containing interesting sketches of natural history; illustrative of the natures, dispositions, manners, and habits of all the most remarkable quadrupeds, birds, fishes, amphibia, reptiles, &c. in the known world by Thomas Smith

D j Descriptions' THE FULMAR IS the largest of the petrel kind THE BLACK TEHN.

FULMARS Genus Fulmarus NoFU - 1 The Northern Fulmar is the stocky, familiar seabird of winter pelagic trips off both coasts. In the Atlantic and in the high Arctic, light-morph birds predominate and appear gull-like in plumage. Along the West ...

Being Studies in Ornithology & Oology by Charles Dixon

Here the Fulmar is a resident, but the natives will tell you that it deserts the islands to a bird from the middle of October to the middle of November, probably when it is moulting. Like its relation, the Albatross, it spends much of its time at sea, ...

The nice story about the Fulmar is that back in 1878 the only place you could ...

fulmar is a sure prognosticator of the west-wind; if it comes to land, no west wind is to be expected for some time, but if it keeps at sea, or goes to sea from the land, whether the wind blow from the south, north, or east, or whether it is a perfect ...

One Hundred and Nineteen Artistic Colored Plates Representing the Different Species and Varieties Drawn and Colored from Nature, Including a Copious Text Giving a Popular Account of Their Habits and Characteristics, Based on Observations Made in the Field by the Most Eminent Writers on Ornithology ; Prefaced by a Systematic Table and Index to Page, Plate and Figure ; Arranged According to the Classification Adopted by the American Ornithologists' Union by John Graham Bell, Frank Michler Chapman

Its mantle being still darker than the variety Pacific Fulmar. The Slender-billed Fulmar is a casual visitor to the Pacific coast. Cinereous Pufi'in, or Sheerwater. ( Pufinus kulrlii.) Fig. 4. Dusky Puffin, Sheerwater, or Petrel. (Puflinu: abscurus.) Fig . 5.

The Encyclopedia of Weapons of World War II (2002)

the eight' gun Fairey Fulmar tends to be overlooked in the part it played in the first three years of the war. until replaced by deckoperating adaptations of the Hurricane and Spitfire , ...

The southern, or Antarctic, fulmar (Fulmarus glacia- loides, a member of the family Procellariidae, order Procellariiformes) is a broadly distributed petrel species of the Southern Ocean. It is a member of the fulmarine petrel complex, which also ...

Online dictionaries and encyclopedias with entries for Fulmar 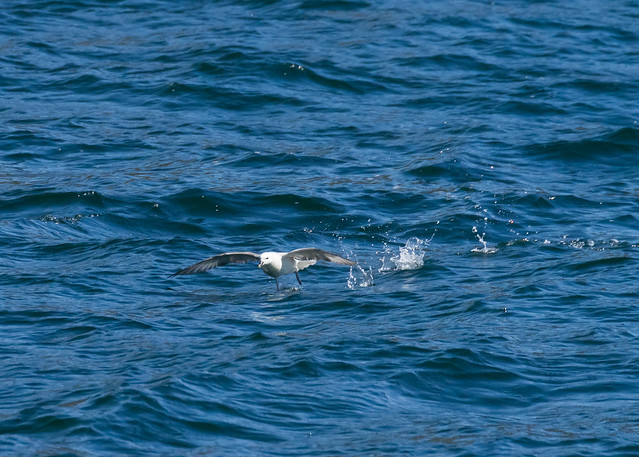 Video shows what fulmar means. Either of two species of pelagic seabird in the genus Fulmarus, Fulmarus glacialis and F. glacialoides, which breed on cliffs..