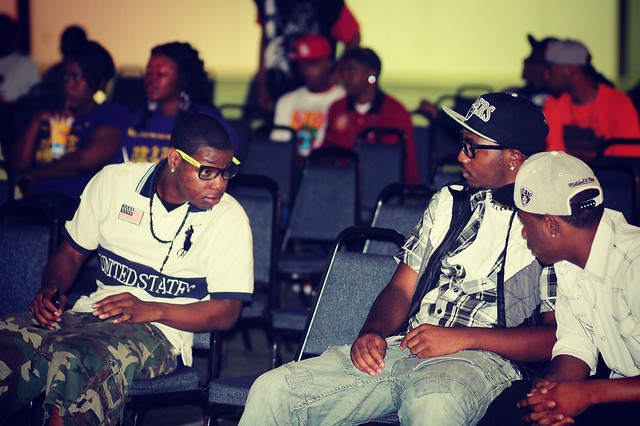 Hip hop music, also called hip-hop, rap music, or hip-hop music, is a music genre consisting of a stylized rhythmic music that commonly accompanies rapping, a rhythmic and rhyming speech that is chanted. It developed as part of hip hop culture, a subculture defined by four key stylistic elements: MCing/rapping, DJing/scratching, break dancing, and graffiti writing. Other elements include sampling, and beatboxing. While often used to refer to rapping, "hip hop" more properly denotes the practice of the entire subculture. The term hip hop music is sometimes used synonymously with the term rap music, though rapping is not a required component of hip hop music; the genre may also incorporate other elements of hip hop culture, including DJing and scratching, beatboxing, and instrumental tracks.

Printed encyclopedias and other books with definitions for Hip hop music

Crime, drugs, deindustrialization, and unemployment, for example, form the content for much rap/hip hop music. Descending from an African oral tradition rap /hip hop allowed for a voice to emerge focusing on self-identification and resistance ...

This kind of reflective nostalgia parallels the “sampling” practices common in the hip hop music tradition and has further assisted FUBU in gaining the support of the hip hop community. In turn, FUBU has contributed greatly to defining the style ...

Online dictionaries and encyclopedias with entries for Hip hop music