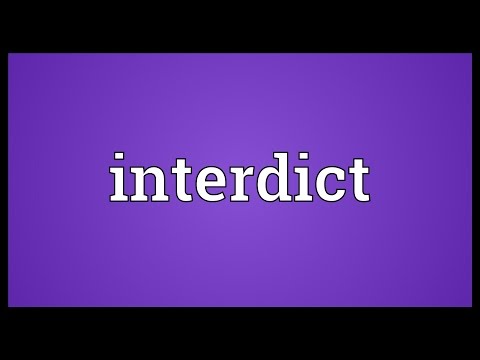 Distribution of usage frequency for the most common synonyms of the verb interdict:

Interdict (to forbid; prohibit) is considered to be an advanced word, according to the Barron's essential words for the GRE, which includes 800 college- and graduate-level words that frequently appear on the Graduate Record Exam.

Definition of the noun interdict

What does interdict mean as a name of something?

Alternative definition of the noun interdict

Definition of the verb interdict

What does interdict mean as a doing word?

Alternative definition of the verb interdict

Printed dictionaries and other books with definitions for Interdict

The interdict is a decree or order of the court restraining a person from committing or continuing a wrong.491 Like the injunction in...

Interdict means everything that's down ...

The Complete Idiot's Guide to the Popes and the Papacy (2001)

Vatican Vocabulary An interdict is a punishment permitting an offender to remain in communion with the Church, but prohibiting participation in certain sacraments and activities. Lucius II (1 144-1 145) forged an alliance with the ...

Freedom of Religion and Belief (2002)

The interdict is a ban upon an entire nation: any administration of sacraments is forbidden, which means that the whole population is then excluded from receiving God's grace. These are indeed powerful weapons, Christian Europe in the ...

An Interdict is an ec. clesiastical censure, which, in its most extended sense, forbids the celebration of divine service or the administration of the sacraments, the burial of the dead, etc. in the place or country under the sentence. This interdict is ...

A Dictionary of British History (2004)

interdict A papal prohibition which could operate at various levels. A general interdict could be imposed only by the pope. Pope Alexander III placed ...

the prohibition of saying Mass, and the interdiction of the guilty, and often of the innocent also, from approach to the sacraments— appears in the ecclesiastical interdict, which is defined to be “an ecclesiastical censure, by which persons are ...

INTERDICT; an ecclesiastical censure in the Catholic church, the effect of which, taken in its most extended sense, is, that no kind of divine service is celebrated in the place or country under the sentence; the sacraments are not administered ...

Online dictionaries and encyclopedias with entries for Interdict

If you need images about Interdict for an article or a report, you can download stock photos at a very small price:

Video shows what interdict means. A papal decree prohibiting the administration of the sacraments from a political entity under the power of a single person (e.g. ...