Definition of the verb loiter

What does loiter mean as a doing word?

Alternative definition of the verb loiter

Printed dictionaries and other books with definitions for Loiter

A loiter is a flight condition where endurance is its primary objective. The Scaled Composites Virgin Atlantic GlobalFlyer [9] is an aircraft designed by Burt Rutan in which Steve Fossett flew a solo nonstop airplane flight around the world in a ...

Loiter is the operation around an airport. It usually consists of various turns along prescribed flight corridors, before the aircraft is permitted to land. Delay in landing (and longer loiter) may be due to air traffic control and weather conditions.

A loiter is a flight condition where ...

To loiter is a real art, and none may successfully imitate it. The rushing torrent of the mountain stream is beautiful and thrilling, but when it reaches the valley of meadows and shaded shores, where the heavenly sunlight filters through the ...

LOITER, To. — "The true sense is to stoop, and fig. to sneak, from the Teut. base LUT, to stoop, appearing in A.S. /utan, Icel. luta, to stoop, lutr, stooping; and in E. lout. Thus to loiter is to act like a lout"— Skeat. The attitude of stooping, however, ...

To Loiter, Lounge. The Teutonic dialects abound in verbs of a frequentative form, which are used in the first instance to signify the flapping or shaking of loose things (frequently also the dashing of liquids), then to express a slack and unstrung ...

Time was when the brand of loiterer could be a literal brand. Under heavy constitutional attack for vagueness, loiter has lost some ...

loiter with intent stand or wait around with the intention of committing an offence. British This is a legal phrase which derives from an 1891 Act of Parliament; it is also used figuratively and humorously of anyone who is waiting around for some ...

A Dictionary of the Abor-Miri Language (1907)

Or, The Vulgar Words, Street Phrases, and "fast" Expressions of High and Low Society. Many with Their Etymology, and a Few with Their History Traced by John Camden Hotten

MIKE, to loiter ; or, as a costermonger defcied it, to " lazy about." The term probably originated at St Giles's, which used to be thronged with Irish labourers, ...

Mike, to loiter ; or " lazy about." The term probably originated in St. Giles's, which is thronged with Irish labourers, who rarely or never labour (Mike being so common a term with them as to become a generic appellation for Irishmen), and who ...

The Slang Dictionary, Or, The Vulgar Words, Street Phrases, and "fast" Expressions of High and Low Society (1865)

MIKE, to loiter ; or, as a costermonger defined it, to " lazy about." The term probably originated at St Giles's, which used to be thronged with Irish labourers, ...

The Slang Dictionary Or the Vulgar Words, Street Phrases, and Fast Expressions of High and Low Society Many with Their Etymology, and a Few with Their History Traced (1864)

MIKE, to loiter; or, as a costermonger defined it, to “lazy about.” The term probably originated at St Giles's, ...

Online dictionaries and encyclopedias with entries for Loiter

Distribution of usage frequency for the most common synonyms of the verb loiter: 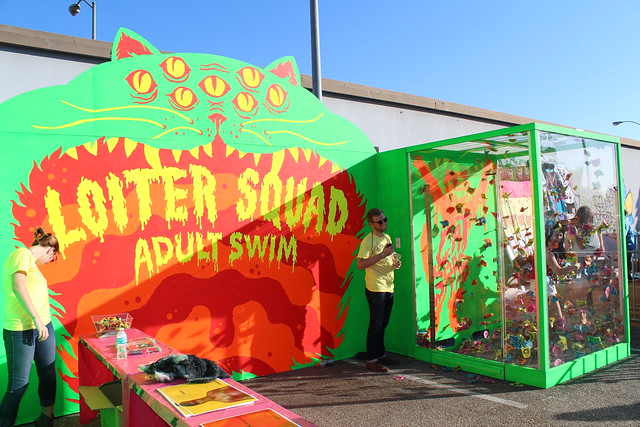