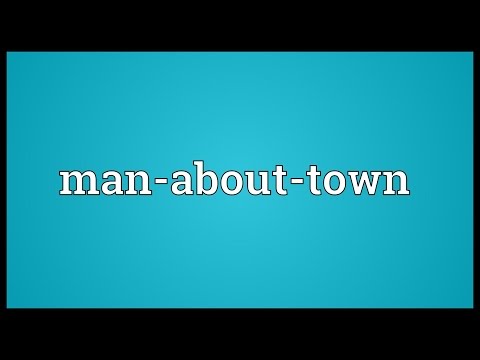 Distribution of usage frequency for the most common synonyms of the noun man-about-town:

Definition of the noun man-about-town

What does man-about-town mean as a name of something?

Alternative definition of the noun man-about-town

Man-about-town a.k.a. Man About Town is a fictional character from the 1966 film Daisies, portrayed by Julius Albert.

Man-about-town a.k.a. Man About Town, later About Town and lastly Town, was an important British men's magazine of the 1950s and 60s. Press Gazette called it the "progenitor of all today's men's style magazines". It was the customer offshoot of the well-established weekly trade magazine for tailors, The Tailor & Cutter.

Printed dictionaries and other books with definitions for Man-About-Town

Online dictionaries and encyclopedias with entries for Man-About-Town

Video shows what man-about-town means. (A worldly, social man.). Man-about-town Meaning. How to pronounce, definition audio dictionary. How to say ...

Go to the usage examples of Man-About-Town to see it in context!