Definition of the noun mantid

What does mantid mean as a name of something?

Alternative definition of the noun mantid

Printed dictionaries and other books with definitions for mantid

The mantid is an accomplished hunter. Its forelegs are oversized, powerful, and ideal for grasping prey. The mantid...

Thus the mantid is a well-integrated feeding machine, no matter what the forces shaping the overall design. Following a quite different tack, MacArthur & Pianka ( 113) ask what range of dietary items natural selection should favor if animals fed ...

The praying mantid is a big predator.

A mantid is a carnivore with powerful chewing mouthparts and the two front legs that it holds up as if praying are actually used to seize its prey. Mantises are solitary animals and eat This illustration from the 1840s shows the praying mantis ' two ...

Concealed among the blooms may be an orchid mantid. Its beautiful surface is tinted pink and white and the pretty petallike plates are a disguise for its legs. Lying motionless, the orchid mantid waits to ambush prey Searching for a meal of ...

A Dictionary of Animal Behaviour (2006)

For example, the mantid (Parastagmatoptem um'punctata) is a carnivorous insect that lies in wait throughout the day and catches flies that come within reach. It sits motionless among vegetation that resembles its own form and coloration.

mantid 9 kb transcript (a.v.) that is translated into a protein over 2700 amino acids long, which plays a critical role in development. The gene is useful in evolution— ary studies because it is very large, is shared by all mammals, and is also ...

The Rosen Comprehensive Dictionary of Biology (2007)

mantid Winged insect that is characterized by ...

A Visual Encyclopedia by DK Publishing

If prey thinks it hasn't been With a triangular-shaped head and the curious SPOtt¢ d> it had bfittfir think againThe praying mantis has the ability to turn it around to see behind, the mantid unique, ability“, tum its head is a strange-looking creature.

Also called mantid, this insect is quite beneficial and is highly interesting. See Fig . 4. The praying mantis is quite large, ranging from 2.5 to 5 inches (6+ to 12+ centimeters) in length. The insect derives its name from the manner in which it holds ...

Online dictionaries and encyclopedias with entries for mantid 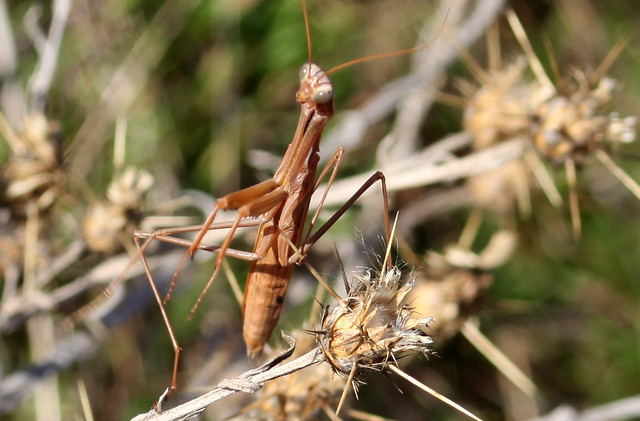