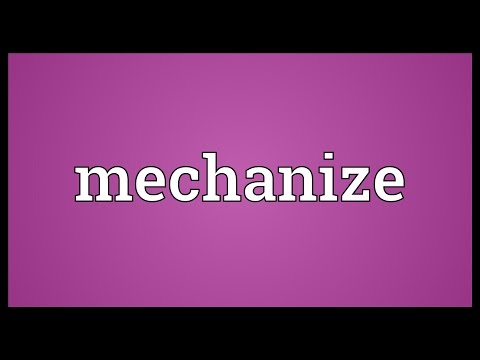 Definition of the verb mechanize

What does mechanize mean as a doing word?

Alternative definition of the verb mechanize

Printed dictionaries and other books with definitions for Mechanize

Mechanize is a Python module that is based on a Perl module of the same name. Mechanize is used to interact with webpages within a Python script. Using Mechanize, you can easily emulate a user in order to find out more about a target ...

Answer: WWW::Mechanize is a perl module used to do automation testing. It can be used to collect links from a webpage and then follow them. It can understand forms, buttons etc, form the HTML requests and parse the HTML response.

Capybara-Mechanize. Mechanize is a headless browser implemented purely in Ruby, and has long been a stalwart for the Ruby community; it uses Nokogiri at its core to provide DOM access, and then builds browser capabilities around this.

In other words, having mechanized one part of the spinning sequence, it was necessary to mechanize all the others to maintain the momentum. This is typical of the sudden upsurge called the Industrial Revolution, during which one invention ...

Companion Encyclopedia of Science in the Twentieth Century (2013)

The first working computers were the creation not of scientific theory, but of electrical and electronic engineering practice applied to a longstanding effort to mechanize calculation. The first applications of the computer to scientific calculation ...

Historical Dictionary of Science and Technology in Modern China (2015)

A Dictionary of Environmental History (2013)

The Italians also passed laws in the 19205 and 19305 to improve soil, protect wildlife in the Alps and encourage re-afforestation but this was offset by pressures to mechanize and improve the productivity of agriculture. feedback A process of ...

Online dictionaries and encyclopedias with entries for Mechanize

Video shows what mechanize means. To equip something with machinery.. To equip a military unity with tanks and other armed vehicles.. To make something ...

The value of this 9-letter word is 25 points. It is included in the first and second editions of the Official Scrabble Players Dictionary.