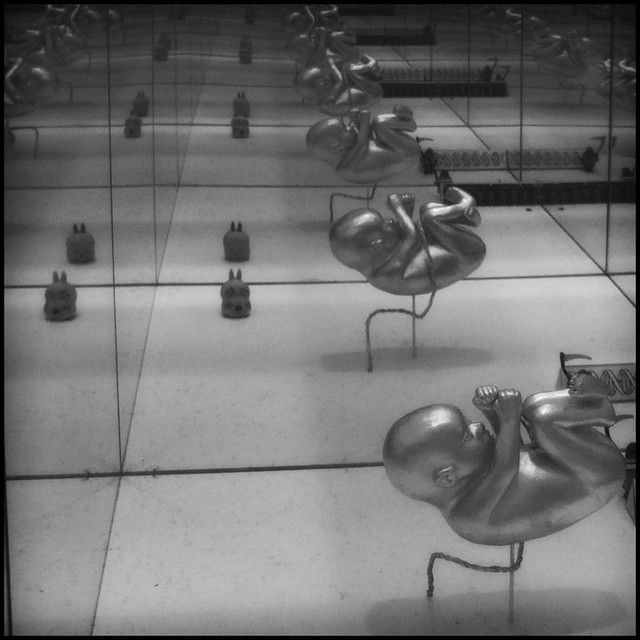 Definition of the noun metempsychosis

What does metempsychosis mean as a name of something?

Alternative definition of the noun metempsychosis

Metempsychosis is a philosophical term in the Greek language referring to transmigration of the soul, especially its reincarnation after death. Generally, the term is only used within the context of Ancient Greek philosophy, but has also been used by modern philosophers such as Schopenhauer and Kurt Gödel; otherwise, the term "transmigration" is more appropriate. The word plays a prominent role in James Joyce's Ulysses, and is also associated with Nietzsche. Another term sometimes used synonymously is palingenesia.

Printed dictionaries and other books with definitions for Metempsychosis

Metempsychosis is a fact. George Eliot's message to the world was ...

The Routledge Handbook of Cultural Tourism (2013)

Concluding comments Metempsychosis is a concept that defines and characterises a specific kind of journey found in literary travel, broadcast schedules and cultural tourism, which had previously received little attention. The original paper ...

Metempsychosis is a fact. George Eliot's message to the world was ...

METAMORPHOSIS—METEMPSYCHOSIS. - Is it not very natural, that all the various metamorphosis with which the earth may be said to bs covered, should have led the orientals, whose imagination is so luxuriant, to imagine that our souls ...

Historical Dictionary of the Druzes (2015)

The Zincali; or, An account of the gypsies of Spain. With an original collection of their songs and poetry, and a dictionary of their language (1841)

METEMPSYCHOSIS. It is scarcely necessary to apologize for the insertion, in this place, of the following poem, which contains the creed of the Buddhists. In many portions of the present work, allusion has been made to the want of any fixed or ...

The accounts of Egyptian metempsychosis vary considerably: indeed such a doctrine was bound to ...

METEMPSYCHOSIS. (MÉTAMORPHOSE,. MÉTEMPSYCOSE). Isn't it quite natural that all the metamorphoses by which the world is overwhelmed made the Orient, where everything is imagined, imagine that our souls pass from one body to ...

Encyclopedia of Reincarnation and Karma (2010)

One of the weaknesses of this view is that if the church had gone to such effort to erase from the Bible compromising passages about reincarnation ( metempsychosis), why did they keep those that are so often used to prove the Bible taught ...

METEMPSYCHOSIS (Gr. penny/moan), or TRANSHIGRATION or run SOUL, the doctrine that at death the soul passes into another ...

Online dictionaries and encyclopedias with entries for Metempsychosis

Video shows what metempsychosis means. Transmigration of the soul, especially its reincarnation after death.. Metempsychosis Meaning. How to pronounce ...

The value of this 14-letter word is 28 points, but it's not an accepted word in the Official Scrabble Players Dictionary.