Monad appears in the following palindromes (phrases that read the same backward as forward):

Definition of the noun monad

What does monad mean as a name of something?

Alternative definition of the noun monad

"MONAD" is a sculpture by Roger Berry. Monad is a teetering winding mass.

"Monad" is a composition.

Printed dictionaries and other books with definitions for Monad

The Big Picture: A Simplified Exposition of the Ancient Wisdom (2015)

The word monad also means unity or oneness. In our daily lives we can apply this knowledge by realising this unity of life. None of the manifested realms of nature can exist without the realms below it on the evolutionary scale. Arguably, the ...

History of the Problems of Philosophy (1902)

Monad is the technical term used by Leibniz to designate the ultiultimate elements—mg. the system of Herbart.

the atom was conceived as extended yet indivisible—a metaphysical contradiction—the monad is a nonspatial qualitative entity.

Every monad is an individual, a soul, a substance, a primal force, endowed with a solely inner action, while derivative forces are said to be material, accidental, modal, 'states of a substance' that are exerted on bodies.38 But the issue involves ...

Monad (Gk., /wos, alone) — The one Self, or " Divine Spark," that gives the life, the fire, the consciousness to the form. Although one in essence, it is to be regarded as permeating all planes and kingdoms ; thus we have the " mineral monad," ...

The Deleuze and Guattari Dictionary (2013)

by Eugene B. Young

Monad. 1. Term from Neo-Platonists for the 'one' that became popularized and attributed to Leibniz, that for him denoted a basic unextended compound, and also the unity of the soul and body which is 'higher' if it produces more effects on ...

The Encyclopedia of Religion and Nature (2005)

At the center ofhis thinking lies the so-called philosophy of monads. The term “ monad,” which Leibniz most likely took from cabbalist and vitalist Franciscus Mercurius von Helmont and Giordano Bruno, reflects the non-material essence of any ...

Online dictionaries and encyclopedias with entries for Monad 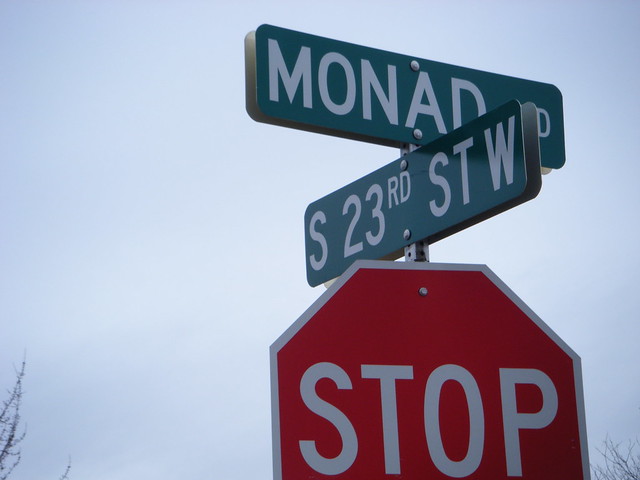 Video shows what monad means. An ultimate atom, or simple, unextended point; something ultimate and indivisible.. A monoid in the category of endofunctors.

I also take it as granted that every created thing, and consequently the created monad also, is subject to change, and indeed that this change is continual in each one. (Gottfried Leibniz)
more quotes about monad...