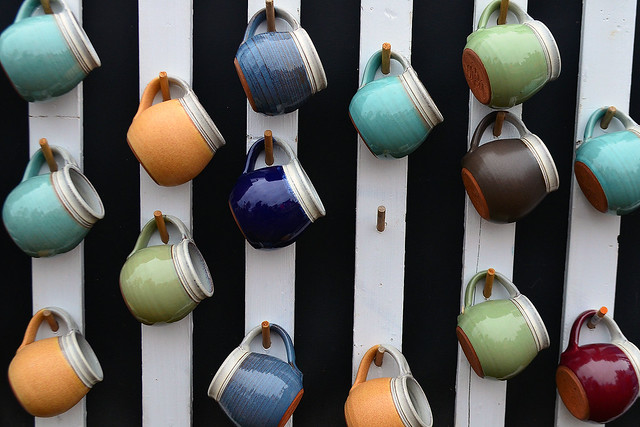 Mugs a.k.a. Mug: A mug is a sturdily built type of cup often used for drinking hot beverages, such as coffee, tea, hot chocolate or soup. Mugs have handles and hold a larger amount of fluid than other types of cup. Usually a mug holds approximately 12 fluid ounces of liquid; double a tea cup. A mug is a less formal style of drink container and is not usually used in formal place settings, where a teacup or coffee cup is preferred. Shaving mugs can be used to assist in wet shaving.

Printed dictionaries and other books with definitions for Mugs

D'z Route 66 Diner, a re- created 1950s eatery where a local brand of root beer served in frosted, heavy glass mugs is a specialty. From Kingman, the highway hugs one rock wall of a ...

See also: coffee mugs. coffee mugs. “Reusing your coffee mug is great for the environment but may not be so great for your health,” writes Danielle Braff in Men's Health magazine. Indeed, according to research conducted by noted University ...

Use two mugs with handles. \ pony glass gum syrup. 1 wine glass Scotch whiskey. Mix well with a little hot water, then ignite the liquid and pour rapidly from one mug to the other three or four times, which will give the appearance of a stream of ...

The treasury of languages, a rudimentary dictionary of universal philology [signed J.B.]. (1873)

Beer mugs are lidless, handled drinking containers made of materials that include glass, earthenware, pewter, and stoneware. Before the development of sturdy glass and stoneware, wooden and earthenware mugs were used. In the late ...

The Housekeeper's Encyclopedia of Useful Information for the Housekeeper in All Branches of Cooking and Domestic Economy ... (1861)

mug2 /mAg/ verb: mugs, mugging, mugged Someone who is mugged is attacked and robbed violently or under threat of violence. — noun mugger: The muggers left him with a broken wrist. — noun mugging: There ...

Online dictionaries and encyclopedias with entries for Mugs

Every man, through fear, mugs his aspirations a dozen times a day. (Brendan Francis)
more quotes about mugs...