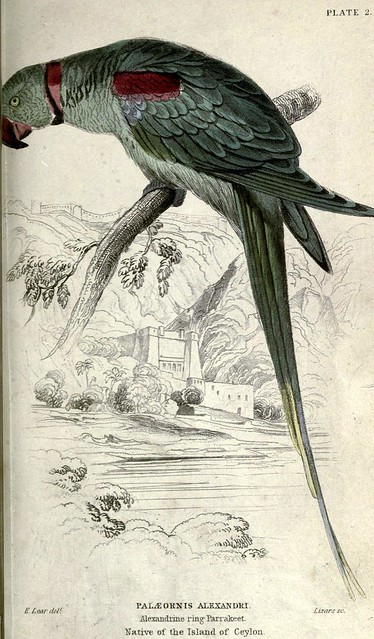 Definition of the noun Palaeornis

What does Palaeornis mean as a name of something?

Palaeornis is a genus of Ornithocheiridae, described by Mantell in 1844.

Palaeornis is a genus of Gastornithidae, described by Bonaparte in 1856.

Palaeornis is a genus of Psittacidae, described by Vigors in 1825.

Printed dictionaries and other books with definitions for Palaeornis

A second Parrot, or rather Parrakeet (Palaeornis easul), still exists, but in very small numbers, and the unique specimen known was obtained in the year 1871. With the examples of these Causes of Mascarene Islands before us, it extirp" the period just mentioned was long subsequent to that in. is not without reason that we suppose a like fate to have befallen many of the feathered inhabitants of other places exposed to similar ravages. We cannot read the accounts not merely of the ...

A Dictionary of Arts, Sciences, and General Literature. Ath - Boi

f Ring-tailed Perroquet, Palaeornis Alexandri. mon parrots, but have longer tails. There are numerous species inhabiting Asia and Australia. The most interesting species is the ring-perroquet (Palaeornis Alexandri), waxant, ancient, and egris, bird. This species is believed to have been brought by Alexander the Great from the East, hence its generic and specific name. PER'RY,f n. [Sax. perie..] A pear- tree or its fruit. PER'RY,+ n. See PIRRY. PERSAUNT, f \ppr. [Fr. percant.] PER'S ANT,f ...

Vigors's genus Palaeornis, and are found only in Asia and Australia, excepting one species, which occurs both in Asia ...

(Palaeornis Alexandri) belongs. It is about the size of a common pigeon, green, with a red collar, whence its name Ring P., and is a native of the Warbling Grass or Zebra Parrakeet (Melopsittacus undulatus). | East Indies. It is said to have been brought to Europe by some of the members of Alexander the urity and finish ; but it ...

Online dictionaries and encyclopedias with entries for Palaeornis

The value of this 10-letter word is 12 points, but it's not an accepted word in the Official Scrabble Players Dictionary.