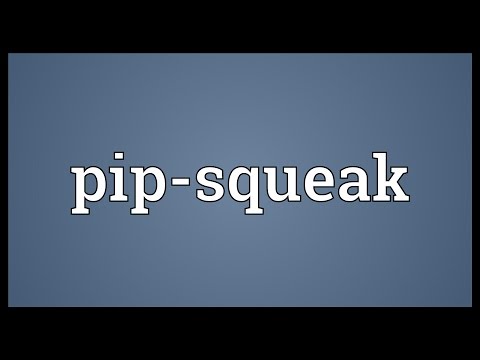 Definition of the noun pip-squeak

What does pip-squeak mean as a name of something?

Pip-squeak was a simple radio navigation system used by the Royal Air Force during the early part of World War II. Pip-squeak used an aircraft's voice radio set to periodically send out a 1 kHz tone which was picked up by ground-based "huff-duff" receivers. Using three huff-duff measurements, observers could determine the location of friendly aircraft using triangulation.

Printed dictionaries and other books with definitions for Pip-squeak

pip-squeak. An insignificant person or object: 1910 (E.V. Lucas: OED). Among the WW1 Army other ranks it had the nuance of 'second lieutenant'—very common in the war novels and memoirs concerning that period. Echoic, but for ...

pipsqueak; pip-squeak noun an insignificant person UK, 1910 There is a scene where a jumped-up pipsqueak officer tells someone who has been through hell: ®Your shoelaces are undone. You«re a bloody disgrace. ̄ ¦ The Guardian ...

Online dictionaries and encyclopedias with entries for Pip-squeak

Video shows what pip-squeak means. A small and insignificant person.. Pip-squeak Meaning. How to pronounce, definition audio dictionary. How to say ...