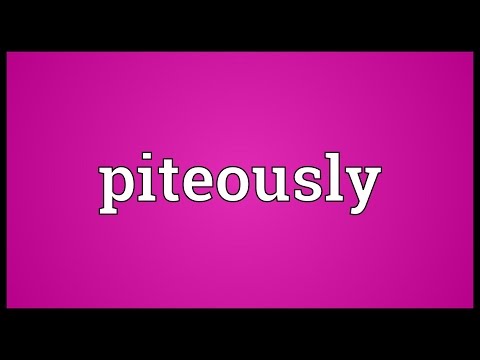 Definition of the adverb piteously

What does piteously mean as an attribute of something other than a noun?

Printed dictionaries and other books with definitions for Piteously

A dictionary of practical materia medica (1900)

Some raised themselves, reeled, fell down again, bleated piteously ; most were in profound coma. Bleeding < ; ether in milk gave much > . Great weakness in feet remained behind. R. rep. has furrowed flower-stalks like R. bulb., but it has a ...

Some raised themselves, reeled, fell down again, bleated piteously; most were ...

But the cat recently sickened and died ; when the dog missed its companion very much, and for some days went about the house whining piteously and seeming to call for its missing mate, as well as searching every place for it. lf offered food, ...

— adverb piteously: The dying man whimpered piteously. pitfall / pitfb:l/ noun: pitfalls A pitfall is an unexpected danger or difficulty , or a mistake that can easily be made: a dictionary designed to help students overcome ...

Online dictionaries and encyclopedias with entries for Piteously

If you need images about Piteously for an article or a report, you can download stock photos at a very small price:

Video shows what piteously means. In a piteous manner, pathetically, plaintively.. Piteously Meaning. How to pronounce, definition audio dictionary. How to say ...