Distribution of usage frequency for the most common synonyms of the verb plaster:

Definition of the noun plaster

What does plaster mean as a name of something?

Alternative definition of the noun plaster

Definition of the verb plaster

What does plaster mean as a doing word?

Alternative definition of the verb plaster

Plaster is a Canadian electro-jazz/electro-rock band formed in 2001 in Montreal. Their sound has been compared to such artists as Amon Tobin, Kruder & Dorfmeister and Medeski Martin & Wood. The trio's debut album, First Aid Kit, was released on Nov 10, 2005 and won the ADISQ award for Best Electronic or Techno Album in 2006.

Plaster is a music band.

Phrases starting with the word Plaster:

Phrases ending with the word Plaster:

Printed dictionaries and other books with definitions for Plaster

Vermiculite plaster is a fire-retardant plaster covering used on steel beams, concrete slabs and other heavy construction materials. Vermiculite is a group name for certain clay minerals, hydrous silicates or aluminum, magnesium and iron that ...

Undercoats ' Browning plaster is an undercoat plaster for moderate—suction solid back' grounds that have a good mechanical key, such as brickwork or blockwork.

Board finishing plaster is a oneacoat plaster for skim coats to plasterboard.

Gypsum plaster is a durable, relatively lightweight, and fire-resistant material that can be used on any wall orceiling surfacethat is not subject to moist or wet conditions. Portland cement plaster, also known as stucco, is used on exterior walls ...

Plaster is a versatile and accurate mouldmaking medium. It is also relatively cheap and fast to use compared with most other moulding processes. Casting plaster is a gypsumbased material that reconstitutes to a hard, durable medium when ...

A Translation of the Eight Books of Aul. Corn. Celsus on Medicine (1831)

Philocrates' plaster is the best for the former case ; that of Hecateus for the latter. 36. In wounds of every kind when it is our object to promote cicatrization, (a process which becomes necessary after the ulcers have been thoroughly cleansed, ...

The Builder's Dictionary: Or, Gentleman and Architect's Companion (1734)

Explaining Not Only the Terms of Art in All the Several Parts of Architecture, But Also Containing the Theory and Practice ...

'Burnt Plaster is the Native calcin'd like Lime in a Kiln or Furnace, pulveriz'd or diluted with Water or other Liquid in working it. In this State it is us'd as Mortar or Cement in Building. It being well sifted and re- due'd to an impalpable Powder, it is ...

plaster is a cost-effective treatment for postherpetic neuralgia (PHN) relative to gabapentin or pregabalin. However ...

Philocrates' plaster is the best for the former case ; that of Hecateus for the latter. 36. In wounds of every kind when it is our object to promote cicatrization, (a process which becomes necessary- after the ulcers have been thoroughly cleansed, ...

Cement plaster is the most suitable and lasting. The plastering should be done in two coats, the first about one-half inch thick, the next one-quarter to three-eighths inch thick. For the first coat use 1 part cement to 2 parts clean sharp sand and ...

Once the plaster is the right consistency, tilt your casting flask so that you can slowly pour the investment down the inside of the flask and not directly onto the wax model. You don't want to dislodge it or break off the sprue from the base or your ...

Traditional Venetian plaster is an earth-friendly, mineral-based option that dries to an inert, no-VOC, nonallergenic surface. The lime and marble or mineral content varies by blend. Synthetic acrylic resins or pigments are often added, but ...

Plaster Partition Components Plaster is a cementitious material that is applied to a surface in a plastic state and subsequently sets, or hardens, to a rigid state. The most common plasters used to day for interior finishing are some combination ...

London — Ammoniacal plaster with mercury. 'lake of purified ammoniacum a pound, purified mercury three ounces, sulphurated oil a fluid drachm. Rub the mercury with the sulphurated oil until the globules no longer appear; then gradually ...

A Dictionary of Medical Terminology, Dental Surgery, and the Collateral Sciences (1867)

Plaster of Ammoniac with Mercury. R. Ammoniac, Ibj.: Mercury, ]§iij.; Olive oil, f£j-; Sulphur, gr. viij. Heat the oil, and gradually add the sulphur, constantly stirring until they unite; then add the mercury, and triturate until globules no longer appear ...

A plaster. Plasters are compon of nnctuous substances, ...

A Dictionary of Dental Science, Biography, Bibliography and Medical Terminology (1854)

A plaster. A solid glutinous compound, which at the ordinary temperature of the body, adheres to the part on which it is placed. Earns-mum Anrraz'srvum. Emplaatrum resinw. Resin plaster; adhesive plaster.

Online dictionaries and encyclopedias with entries for Plaster 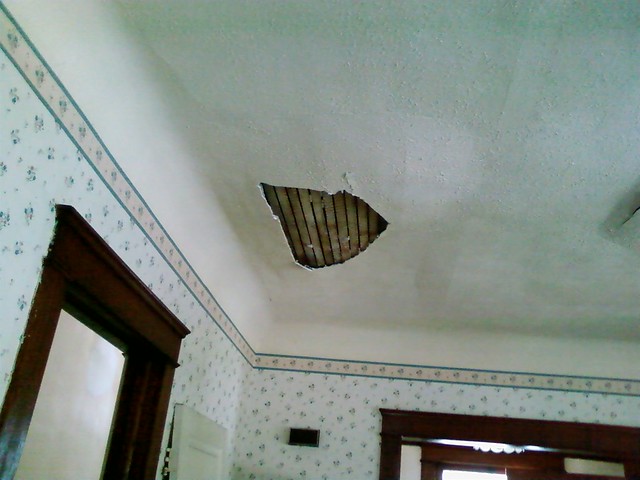 View more videos about To Plaster, Plaster cast, and Plaster of Paris.

Patience is a plaster for all sores.
more quotes about plaster...

See also the blanagrams of Plaster!

Go to the usage examples of Plaster to see it in context!