Definition of the noun prairie

What does prairie mean as a name of something?

"Prairie" is a musical album of D'incise.

Prairie: Prairies are ecosystems considered part of the temperate grasslands, savannas, and shrublands biome by ecologists, based on similar temperate climates, moderate rainfall, and a composition of grasses, herbs, and shrubs, rather than trees, as the dominant vegetation type. Temperate grassland regions include the Pampas of Argentina, Brazil and Uruguay as well as the steppes of Eurasia. Lands typically referred to as "prairie" tend to be in North America. The term encompasses the area referred to as the Interior Lowlands of Canada, the United States, and Mexico, which includes all of the Great Plains as well as the wetter, somewhat hillier land to the east. In the U.S., the area is constituted by most or all of the states of North Dakota, South Dakota, Nebraska, Kansas, and Oklahoma, and sizable parts of the states of Montana, Wyoming, Colorado, New Mexico, Texas, Missouri, Iowa, Illinois, Indiana, Wisconsin, and western and southern Minnesota. The Central Valley of California is also a prairie. The Canadian Prairies occupy vast areas of Manitoba, Saskatchewan, and Alberta.

View more phrases with the word Prairie in thesaurus!

Printed dictionaries and other books with definitions for Prairie

Native prairie is a baseline from which creative re- search can depart, and return for reference.

Original tallgrass prairie is the endpoint of twenty-five million years of evolution; it cannot be restored overnight, if indeed it can be restored at all.

Native prairie is a baseline from which creative research can depart, and return for reference.

Original tallgrass prairie is the endpoint of twenty-five million years of evolution; it cannot be restored overnight, if indeed it can be restored at all.

by Arkansas. Dept. of Planning

The Grand Prairie is the typical habitat of this species, the species having...

A prairie is a complex ecology of hundreds of different plants, most of which bloom sometime in the growing season.

Tallgrass prairie is an ecosystem unto itself. The mixed grasses can be quite tall and blow in the...

Women Write about Their Mothers by Kathryn Kysar

A prairie is a fancy plain of grass, diverse and spectacular, billowing like the sea. A prairie is an industrial dump with wire-laced skies and rat—faced factories. The Projects were supposed to be planned communities, orchestrated fanciness, ...

The prairie is a high plateau at an estimated ...

“Prairie is the term given to such tracts of land as are divested of timber” that cover “an extent of territory which probably equals in area the whole empire of China,”1 stated the English botanist John Bradbury in 1811. Ellen Bigelow, an 1835 ...

Report on the Internal Commerce of the United States (1891)

The prairie is a high plateau at an estimated ...

Deciding sometime tomorrow afternoon that maybe we should have a few more prairies around, and then abandoning a few cornfields to that end, just won't get it . Original tallgrass prairie is the endpoint of twenty- five million years of evolution ...

A popular notion about the prairie is that its wonder and beauty have gone forever, and that there is nothing to do but mourn about it. Historians, travelers, novelists, poets, and musicians have tried to express the grandeur, loneliness, and ...

Shortgrass prairie is the most drought-tolerant, so it is found in the driest areas ( the rain shadow of the Rocky...

Virgin prairie is a rich tapestry of grasses punctuated by plants in the Daisy family such as blazing stars (Lia- tris species), ...

Marl prairie is an important feeding area for wading birds, especially in the dry season. Organisms such as crayfish and amphibians, which do not require permanent surface water, are normally found in the marl. However, in areas where there ...

The Grand Prairie is a great plateau, the southwestern part of which is a bed of hard limestone. Its southeast edge is marked bv an escarpment reaching from the Colorado river to the Rio Grande, and known as the Bal- cones. Many springs ...

The Grand Prairie is a great plateau, the southwestern part of which is a bed of hard limestone. Its southeast edge is marked by an escarpment reaching from the Colorado river to the Rio Grande, and known as the Balcones. Many springs ...

A compendious and complete system of modern geography (1814)

or, A view of the present state of the world. Being a faithful abridgement of the American universal geography (edition of 1812) with corrections and additions ... by Jedidiah Morse

La Prairie is a little village on the opposite side of the river to Montreal. Sorcllc lies 45 miles below Montreal, and contains 100 scattered houses. Its chief business is ship building. Inland Navigation. There are two routes westward to fort ...

Preserving Public Lands for the Future (1998)

The Politics of Intergenerational Goods by William R. Lowry

"38 The tallgrass prairie is a major ecosystem that the NPS ...

Life in the Rocky Mountains

Horse Prairie is a pleasant rolling plain fifty or sixty miles in circumference and surrounded by lofty mountains. In the middle of the valley there is a conical rocky mound rising from the plain on the north side of the stream, and directly fronting a ...

Dictionary of the American West (2008)

PRAIRIE A grassland, often with tall grasses and few trees. Adapted from the French word meaning “meadow.” The prairies extend west from the Mississippi Valley to the Great Plains at about the 100th meridian. The key distinctions are that ...

PRAIRIE DOG Desert." For early settlers crossing these vast expanses on foot or on horseback, they must have appeared as foreboding as any true desert. The prairies of North America include the tallgrass prairies at the eastern boundary of ...

Online dictionaries and encyclopedias with entries for Prairie 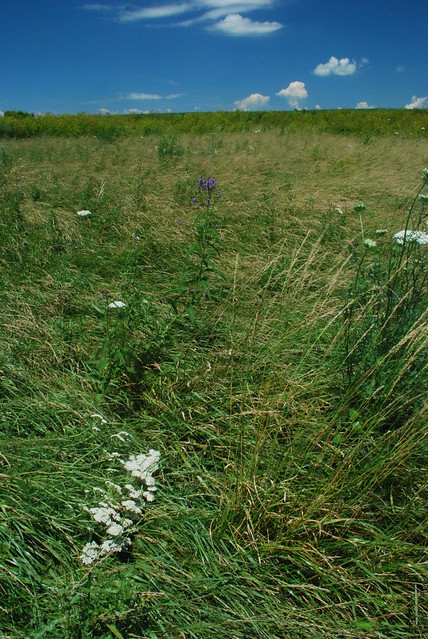 The antiwar movement is a wild orgasm of anarchists sweeping across the country like a prairie fire. (Richard Milhous Nixon)
more quotes about prairie...