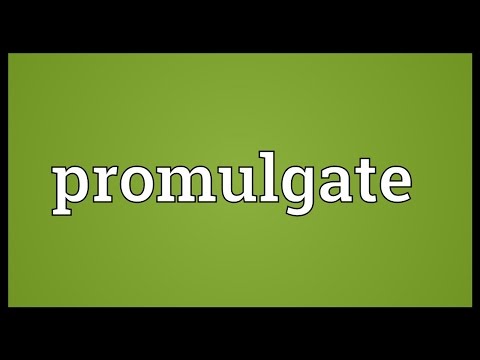 Distribution of usage frequency for the most common synonyms of the verb promulgate:

Definition of the verb promulgate

What does promulgate mean as a doing word?

Definition of the verb promulgate for high school students

The verb promulgate is considered to be a word that all college-aspiring students should know and understand, so it frequently appears on the SAT, ACT and other college admissions tests.

Printed dictionaries and other books with definitions for promulgate

promulgate (PROM-әl-gāt) vb. To promulgate something (a law or policy, for example) is to openly announce it and put it into effect. In 1947 President Harry Truman promulgated a program that barred Communists (or people who associated ...

promulgate 791 propose 793 see propel], the act of propelling or driving. dilatory; ready; told down, as prompt payment; unobstructed : v. to incite to action or exertion; to assist a speaker when forgetful or at a loss for words; to help at a loss; ...

Online dictionaries and encyclopedias with entries for promulgate

If you need images about promulgate for an article or a report, you can download stock photos at a very small price:

Video shows what promulgate means. To make known or public.. To put into effect as a regulation.. promulgate pronunciation. How to pronounce, definition by ...