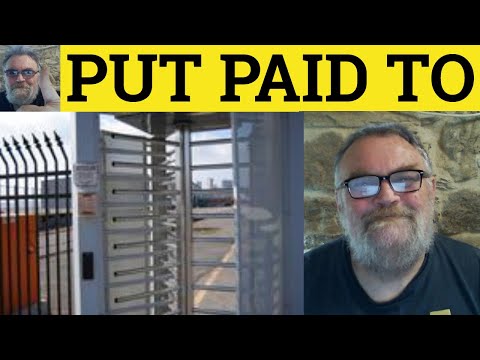 Put
Paid
to
is an acrostic for ppt.

Definition of the verb Put Paid to

What does Put Paid to mean as a doing phrase?

Printed dictionaries and other books with definitions for Put Paid to

put paid to (something) to prevent a ...

put paid to Br.,Aus.ruin, finish completely (smth. such as an idea): The army today putpaidto the bionic fish Evening Standard., “ Corazzini” put paid to any ideas we might have had of taking advantage of the ...

put paid to The rain put paid to our plans for an enjoyable weekend (= put an end to). • pay noun a sum of money given for work or services. Word Family payment mum 1 ...

c put paid to to put a stop to something UK, 1919. c put yourself about 1 to get around and be seen. Originally police usage, now widespread probably as a result of television and film crime dramas.

To put paid to something such as a plan or scheme is to prevent it from being carried out. payable /"peiabal/ adjective 1 A sum of money is payable if it can or must be paid: The second instalment is payable on or before 1 July.

Online dictionaries and encyclopedias with entries for Put Paid to

Go to the usage examples of Put Paid to to see it in context!