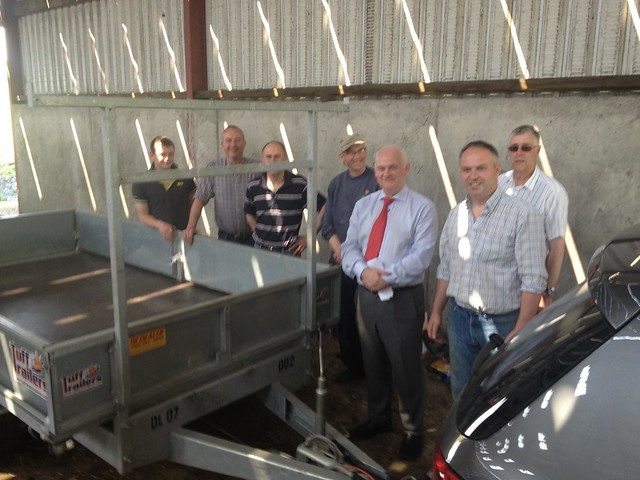 Raphoe is a town in County Donegal, Ireland. It is the main town in the fertile district of East Donegal known as the Laggan, as well as giving its name to the Barony of Raphoe and also as to the Roman Catholic Diocese of Raphoe and the Church of Ireland Diocese of Derry and Raphoe.

Printed dictionaries and other books with definitions for Raphoe

Handbook for travellers in Ireland (1864)

Raphoe is a pleasantly-situated little town, once famous for being the seat of a bishopric which was, however, united to that of Deny in 1835. A monastery established here by St Columb was afterwards converted into a bishopric by St. Eunan ...

Raphoe is a corruption of Raith-both, the fort of the huts. Castles There is hardly any portion of Ireland containing so many castles as the shores of Lecale and Strangford Lough. In Co. Antrim the castles were perched on the basalt crags which ...

A dictionary of geography, ancient and modern (1834)

Raphoe is an episcopal see. The greater part of the population are Roman Catholics, and the peasantry on the coast are entirely ignorant of the English tongue. DONGOLA. A city and province of Nubia, or the ancient Ethiopia. Old Dongola ...

On the Plan of Reichard's Itineraries Containing an Account of All the Direct and Cross Roads : Together with a Description of Every Remarkable Place by Charles Claude Hamilton

RAPHOE is a small town of Donnegal, with a Bishop's See, founded by St. Eunan in the 6th century. The Cathedral has been handsomely repaired, and the Episcopal residence, formerly a Castle, which was besieged in the great rebellion ...

The geography of the British Isles (1834)

Raphoe is a small town, the see of a bishop, founded by St. Eunan in the 9th century. Its cathedral has been handsomely repaired, and its episcopal residence , which was formerly a castle, and besieged in 1641, is now a beautiful mansion.

A Dictionary of Geography, ancient and modern, etc (1834)

by Josiah CONDER (Editor of “The Patriot.”.)

Raphoe is an episcopal see. The greater part of the population are Roman Catholics, and the peasantry on the coast are entirely ignorant of the English tongue. DONGOLA. A city and province of Nubia, or the ancient Ethiopia. Old Dongola ...

The Encyclopædia of Geography (1839)

Comprising a Complete Description of the Earth, Physical, Statistical, Civil, and Political ... by Hugh Murray

Raphoe is a celebrated episcopal see, but now only a decayed village. Derry, or Londonderry, a large and fine county, is crossed by a range of mountains, whose principal peaks are from 1000 to 1500 feet high, and a considerable part of ...

RAPHOE, in Geography, a bishopric of Ireland, ...

A Topographical Dictionary of Great Britain and Ireland (1833)

Compiled from Local Information, and the Most Recent and Official Authorities by John Gorton

The baronies, into which the county is divided, are called Bannagh, Boylagh, Inishowen, Kilmacrenan, Raphoe, and Tyrhugh. The principal towns are the market and seaport town of Ballyshannon ; the countytown of Lifford, inconveniently ...

Forming a Work of Universal Reference, Both Constitutional and Legal; and Embracing the Terms of Civil Administration, of Political Economy and Social Relations, and of All the More Important Statistical Departments of Finance and Commerce

At the time of passing the act, by which many were to be extinguished on the death of the existing bishop, there were in the province of Armagh–Meath and Clonmacnoise, Clogher, Down and Connor, Kilmore, Dromore, Raphoe, and Derry.

Online dictionaries and encyclopedias with entries for Raphoe