Revive appears in the following palindromes (phrases that read the same backward as forward):

Distribution of usage frequency for the most common synonyms of the verb revive:

Definition of the verb revive

What does revive mean as a doing word?

Revive is one of the top 1000 most common verbs in the English language.

Alternative definition of the verb revive

"Revive" is a 2011 short drama, mystery and thriller film written and directed by Alyson Standen.

Printed dictionaries and other books with definitions for Revive

Review and Analysis of Thomas Frank's Book by BusinessNews Publishing

Corporate Interests and Political Power in America by C. Boggs

on the stump, but once conservatives are in office the only old-fashioned situation they care to revive is an economic regimen of low wages and lax regulations.”6 Republicans who stand with the interests of a small plutocratic stratum cannot ...

Reaching Revive is a step process. Unfortunately, after people achieve the empowered utopia of Thriving, most newcomers start on the downward slope toward a lesser stage of empowerment known as “The Arrivers”. This stage is where a ...

How Conservatives Won the Heart of America by Thomas Frank

Revive is a frightening, challenging, life-changing place to be, and to be honest, it feels a lot more like the body of the One who hung around with prostitutes and other "lowlifes" than the average church. Cutting Edge: case study In the early ...

An application for an order to revive Is a motion, expressly so made by section 532 of the Code. Section 534 prescribes what the notice of said motion shall contain. Section 535 provides by whom such notice shall be served. It says: " Notices of ...

Thus the scire facias to revive is a mere continuance ...

Online dictionaries and encyclopedias with entries for Revive 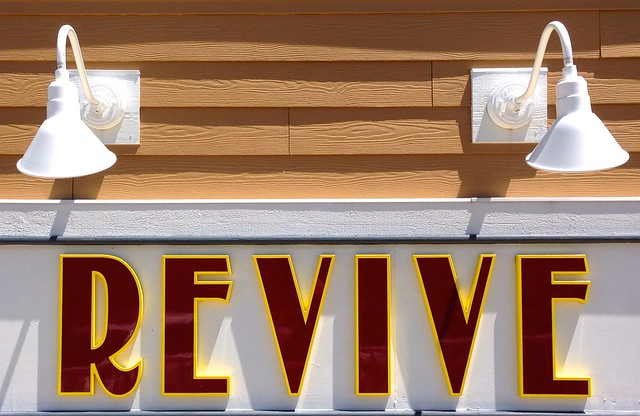 Because of the fashion, the young people don't have any access to the history of music, unless people like me revive it. There are very few people to revive it, because you can't earn any money doing it. (Bill Wyman)
more quotes about revive...