Definition of the noun roulade

What does roulade mean as a name of something?

Alternative definition of the noun roulade

Roulade: A roulade is a dish in various European cuisines typically consisting of a slice of meat rolled around a filling, such as cheese, vegetables, or other meats. The term roulade originates from the French word "rouler", meaning "to roll". A roulade, like a braised dish, is often browned then covered with wine or stock and cooked. Such a roulade is commonly secured with a toothpick, metal skewer or a piece of string. The roulade is then sliced into rounds and served.

"Roulade" is a musical album of Ondekoza.

Roulade: A roulade is an elaborate embellishment of several notes sung to one syllable. It is most associated with the operatic coloratura vocal style. It consists of a single phrase, or could even be part of a longer phrase. It is more extended than ornaments such as a trill, mordent or turn, but not to the extent that it could be called a cadenza. It is usually performed in a rhythmically free style, either by use of rubato or over a musical pause and it is in this way that it is distinguished from a melisma. Examples are in the operatic works of Bellini and Donizetti and the Nocturnes of Chopin. Extended embellishments found in modern day Gospel vocalisations could be said to be roulades.

Printed dictionaries and other books with definitions for Roulade

overtones a book of temperaments (1919)

The roulade is the highest expression of art. It is the arabesque which adorns the most beautiful room in the building — a little less, and there is nothing; a little more, and all is confused. Intrusted with the mission of awakening in your soul a ...

Grow, Harvest, Preserve, Cook and Make the Most of Your Local Produce by Dick Strawbridge, James Strawbridge

A roulade is a surprisingly easy way to serve poultry. All you need is skinless, boneless chicken breasts and the filling of your choice. The meat will be infused with flavour and moist from poaching. Try fillings such as garlic and lemon, pesto, ...

The Edition Définitive of the Comédie Humaine: Philosophic and analytic studies (1900)

The roulade is the highest expression of art, it is the arabesque which adorns the most beautiful room in the building: a little less, and there is nothing; a little more, and all is confused. Entrusted with the mission of awakening in your Soul a ...

The roulade is the highest expression of art.”24 Capraja's desire hardly ...

A roulade is a filled spiral roll. Welsh rarebit is a well known cheese dish with mustard and beer on some toast. A roaster is a chicken for roasting. Most meets for the oven make a roast. A roux is a sauce or a soup base. Rouille is a Provencal ...

The Linguistics of Laughter (2006)

the derived version, which will often involve a concrete, tangible entity (as, for instance, home rule is a concept whilst home roulade is a physical object).9 This is yet another example of the bathos which is so often a component of humour.

The portobello mushroom roulade is a staple on Carmelita's menu.

where the menu of Wensleydale gateau and Cumberland cheese and mushroom roulade is a world away from nut cutlets and lentil stews. TOP FIVE MICROBREWERIES Hankering after something more adventurous than ...

ROULADE, a passage consisting of running notes of equal lengths, sung upon one syllable ; called also division. Roulade denotes also, sometimes, point d' orgue. ROULEMENT. According to some authors, this term denotes the same with ...

ROULADE (French). A rapid flight of decorative or ornamental notes. ROULEMAN. See Roulade. ROUND. A vocal composition; a ...

The Important Terms Used in Music with Pronunciation and Concise Definition, Together with the Elements of Notation and a Biographical List of Over Five Hundred Noted Names in Music by Louis Charles Elson

Encyclopaedia of Religion and Ethics: Mundas-Phrygians (1917)

It will be noticed that the only departure from the monotony of the dominant tone is a roulade of five notes, from which the singer immediately hastens to return to the monotonous cantillation on the dominant. There are many airs to the adhan, ...

Veal, Roulade of Veal, Shoulder of thoroughly done. Serve with melted butter. Veal, Roulade of – Remove the bone from 4 lbs. of veal; lay it flat, and sprinkle it with chopped parsley, sweet herbs, pepper, and salt; lay over this slices of bacon; ...

Culinary Encyclopaedia - A Dictionary of Technical Terms, the Names of All Foods, Food and Cookery Auxillaries, Condiments and Beverages - Specially a (2013)

Roulade, f. Rolled meat smoked and cooked. Roux, f. A preparation of butter and flour, used for thickening soups and sauces. There are three kinds of roux, white, fawn and brown. Royaus. A delicatelyflavoured small fish, similar to sardines, ...

A Dictionary of Technical Terms by Charles Herman Senn

Online dictionaries and encyclopedias with entries for Roulade 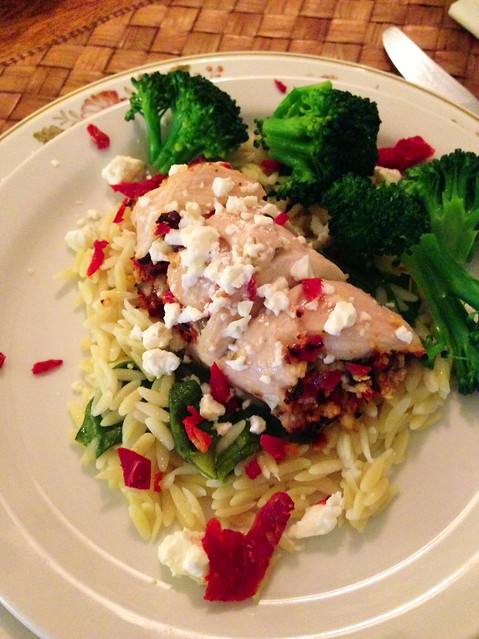 Video shows what roulade means. An elaborate embellishment of several notes sung to one syllable.. A slice of meat that is rolled up, stuffed, and cooked.

Couldn't select: You have an error in your SQL syntax; check the manual that corresponds to your MariaDB server version for the right syntax to use near 'roulade"" IN BOOLEAN MODE) LIMIT 1,1' at line 1

See also the blanagrams of Roulade!

Go to the usage examples of Roulade to see it in context!