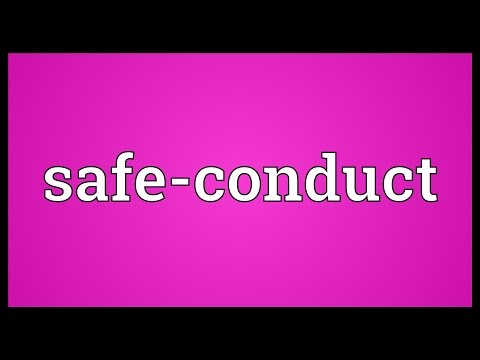 Definition of the noun safe-conduct

What does safe-conduct mean as a name of something?

"Safe-conduct" a.k.a. "Safe Conduct" is a 2002 French historical drama film directed by Bertrand Tavernier and written by Tavernier and Jean Cosmos.

"Safe-conduct" a.k.a. "Safe conduct" is a book by Paul Ickovic.

Safe-conduct a.k.a. Safe conduct is the situation in time of international conflict or war where one state, a party to such conflict, issues to a person, usually an enemy state's subject, a pass or document to allow the enemy alien to traverse its territory without harassment, bodily harm, or fear of death. Safe conduct is only granted in exceptional circumstances. Safe conduct may be given to an enemy to allow retreat under surrender terms or for a meeting to negotiate, to a stateless person, or to somebody who for some reason would normally not be able to pass.

Printed dictionaries and other books with definitions for safe-conduct

SAFE-CONDUCT; a security granted by the sovereign authority, or persons delegated by it, to strangers, or other persons, to enable them to repair to, and return from a certain place undisturbed. In most of these cases, passports have now ...

The Law-dictionary: Explaining the Rise, Progress, and Present State, of the English Law (1811)

Defining and Interpreting the Terms Or Words of Art; and Comprising Copious Information on the Subjects of Law, Trade, and Government by Sir Thomas Edlyne Tomlins

The Violation of Safe-conducts or Passfiorts, or the committing acta of hostility against such as are in amity, league, or truce with us, who are here under a general implied Safe-conduct, are breaches of public faith; without the preservation of ...

safe-conduct a sacred trust of civilization; the other paragraphs of art. 22 specified how that sacred trust was to be exercised and scrutinized (see Mandates System). Chap. XI of the U.N. Charter, entitled 'Declaration Regarding ...

A Dictionary of English Manuscript Terminology (2008)

Online dictionaries and encyclopedias with entries for safe-conduct

Video shows what safe-conduct means. A document that grants safe passage through enemy territory in times of war.. A convoy or guard to protect a person in a ...

Go to the thesaurus of safe-conduct to find many related words and phrases!