Definition of the noun sarcoma

What does sarcoma mean as a name of something?

Alternative definition of the noun sarcoma

Sarcoma is a musical group.

Sarcoma: A usually aggressive malignant mesenchymal cell tumor most commonly arising from muscle, fat, fibrous tissue, bone, cartilage, and blood vessels. Sarcomas occur in both children and adults. The prognosis depends largely on the degree of differentiation of the tumor. Representative subtypes are liposarcoma, leiomyosarcoma, osteosarcoma, and chondrosarcoma.

Printed dictionaries and other books with definitions for Sarcoma

EWING'S SARCOMA First described by James Ewing in the early 1920s, Ewing's sarcoma is the prototypical nonhematopoietic small round cell malignancy of bone. Ewing's sarcoma is a member of a group of lesions characterized by specific ...

Kaposi's sarcoma is a rare malignancy of endothelial cells seen in unique settings. The classic variant is seen in older patients...

AIDS-associated Kaposi's sarcoma is the most common form of the disease. It is most often seen in younger men.

The commonest site of primary cranial Ewing sarcoma is the temporal bone, followed by frontal, parietal and occipital ...

Synovial Sarcoma Although synovial sarcoma is a misnomer,

Synovial sarcoma is the fifth most commonly reported soft tissue malignancy, accounting for approximately 5–10% of all ...

Sarcoma is the most common primary malignancy to involve the atria. Angiosarcoma, rhabdomyosarcoma, undifferentiated...

Synovial sarcoma is an uncommon malignancy that represents 5% to 10% of all soft tissue sarcomas.

General and Oral Pathology for the Dental Hygienist (2013)

NAME: Ewing sarcoma Etiology: Ewing sarcoma is a malignant bone tumor of unknown origin; however, a neural or neuroectodermal origin is suspected. A relationship between the devel— opment of this tumor and past irradiation or ...

Kaposi sarcoma is a malignancy of the vascular endothelium that occurs in elderly men (classic Kaposi sarcoma), African...

Sarcoma is a growth springing from the connective tissue group. It is found in the mouth on the...

Sclerosing osteogenic sarcoma is the type in which there is a production of much dense, solid bone, sometimes forming the bulk of the tumor. A large portion of the end of a bone is converted into a solid mass of dense almost ivory-like bone ...

Although rare in the foot and ankle, osteogenic sarcoma is the second most common primary malignant bone tumor.

Lookingbill and Marks' Principles of Dermatology (2013)

Kaposi's sarcoma is a malignant tumor derived from endothelial cells. It is manifest by multiple vascular tumors that usually occur first in the skin, ...

Ewing sarcoma is a tumor of bone and soft tissue that represents the undifferentiated end of the spectrum and is most...

A new study, 'Synovial sarcoma is a stem cell malignancy,' is now available. “ Synovial sarcoma (SS) is a malignant soft tissue tumor characterized by its unique t(X;18)(p11;q11) chromosomal translocation leading to the formation of the ...

Histology Epithelioid sarcoma is an infiltrative lesion composed of a nodule of tumor cells having a bland monomorphic epithelioid, spindled, or rhabdoid appearance. Central necrosis is common and some tumor may be extensively hyalinized ...

Sarcoma is a rare form of cancer which affects all age groups and all parts of the body. There are approximately 3200 new diagnoses in the United Kingdom (UK) each year (Sarcoma UK 2012). It affects connective tissue of the body including ...

Medullary sarcoma is the term applied by Mr. Abernethy to a malignant and dangerous kind of tumour, which resembles in its strućture and appearance the medullary substance of the brain. It is often seen affecting the testis, and has been ...

Synovial sarcoma is a spindle cell tumor with variable epithelial differentiation and specific chromosomal alteration (t(x;18) (p11;q11). It occurs with a male predominance mainly in young adults. It commonly arises in deep soft tissue of the ...

Recognition and Management by Robert A. Schwartz

Alveolar soft part sarcoma is a rare malignancy of uncertain histogenesis; its two main sites are the lower extremities in adults and the head and neck in children [ 120]. It may appear as a slow-growing, painful, and pruritic mass in a child [121].

Histiocytic sarcoma is the most commonly occurring tumor within the joints of dogs.

Histiocytic sarcoma is a grossly multilobulated, infiltrative tumor that often fills the joint and extends into the surrounding bones and soft tissues (Fig. 2-211).

Uterine Sarcoma Uterine sarcoma is an uncommon lesion and accounts for fewer than 5% of uterine cancers.

The endometrial stromal sarcoma is a pure lesion ( having only sarcoma but no carcinoma present) and is a tumor that arises from ...

Diagnostic Surgical Pathology of the Head and Neck (2009)

KaposiSarcoma Kaposi sarcoma is a multicentric proliferation of vascular and spindle cell components, which was first described in 1872.337 Now considered to be a human herpesvirus 8 (HHV 8)– induced or –associated tumor, it is unclear ...

Online dictionaries and encyclopedias with entries for Sarcoma 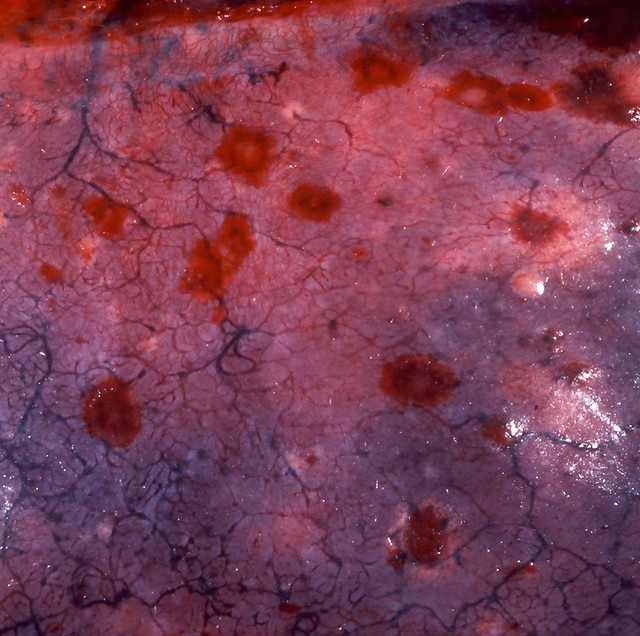