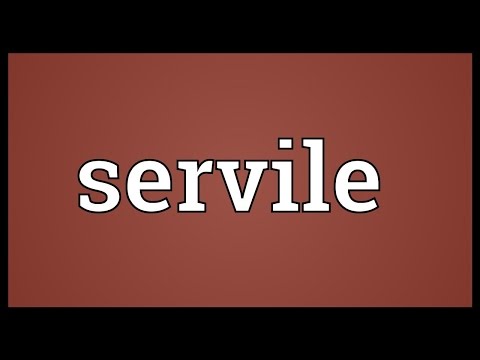 Servile (submissive, obedient) is considered to be an advanced word, according to the Barron's essential words for the GRE, which includes 800 college- and graduate-level words that frequently appear on the Graduate Record Exam.

Definition of the adjective servile

What does servile mean as an attribute of a noun?

Alternative definition of the adjective servile

Definition of the adjective servile for high school students

The adjective servile is considered to be a word that all college-aspiring students should know and understand, so it frequently appears on the SAT, ACT and other college admissions tests.

Printed dictionaries and other books with definitions for servile

An Abridged and Updated Edition of Modern Catholic Dictionary by John A. Hardon

SERVILE FEAR. Selfish fear based on the dread of pain to oneselfthat would follow if another were offended. It is the fear of punishment for wrongdoing, without being motivated by honor or a sense of duty, and least of all by love. Theologically, however, servile fear may coexist with filial fear. There is nothing incompatible in ...

Online dictionaries and encyclopedias with entries for servile

If you need images about servile for an article or a report, you can download stock photos at a very small price:

Video shows what servile means. of or pertaining to a slave. submissive or slavish. Not belonging to the original root.. servile pronunciation. How to pronounce ...

I hardly know so true a mark of a little mind as the servile imitation of others. (Fulke Greville)
more quotes about servile...

See also the blanagrams of servile!

Go to the usage examples of servile to see it in context!