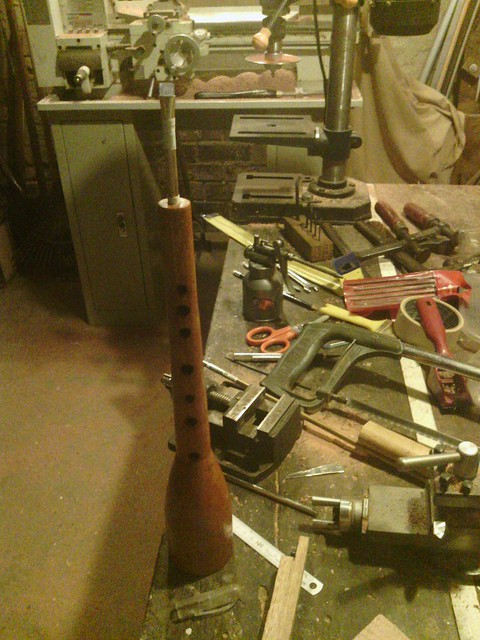 Definition of the noun shawm

What does shawm mean as a name of something?

Alternative definition of the noun shawm

Printed dictionaries and other books with definitions for Shawm

A Reference Guide by Suzanne Lord

Shawm The shawm is a double-reed instrument, like the modern oboe, which is descended from it. This means that two pieces of thin reed are tied together so that when the player blows on them, they vibrate against one another and produce ...

The shawm is an early oboe and the other one is ...

9s Shawm is a woodwind instrument of the Middle Ages and Renaissance that has a double reed and was the predecessor of the modern oboe.

than a cubit, and it was somewhat thicker than a pipe; its opening was oblong, so as to permit blowing on it with the mouth; at the lower end it had * The word shawm is a corruption of chalumeats, and signified a primitive clarinet or oboe.

Double-reed Instruments: Shawms The shawm is an ancient instrument of this region. It is known as zurna east of the Mediterranean; srndj in the Gulf area; mizmdr or mizmar baladi and sibs aba (sibs being a small instrument, aba a large one) ...

Using the Characteristics of Our Instruments in Music Therapy by Dawn Loombe, Jo Tomlinson, Amelia Oldfield

The shawm is the medieval precursor to the oboe. This instrument was brought back to Europe ...

Thus, either the shawm is a kind of oboe (like the hautboy ...

Concise Encyclopedia of Languages of the World (2010)

SUP shawm sæværd-t-oj fyng-yl. put-PAST-3PL table-SUP 'The Nart put the shawm on it, on the table.' The constructio ad sensum is very common for both singular subjects with plural verbs and vice versa. Copular Sentences Sentences with ...

Grove's Dictionary of Music and Musicians (1909)

SHAWM, a wind instrument of the oboe type, with a double reed but a ...

shawm ( shôm). A wind instrument played with a double reed that is thought to be about two ...

These include lutes, rebecs, psalteries, transverse flutes, shawm, trumpets frame drums, tambourines, and castanets. Flute-and-drum duos, in which both instruments are played by ...

Shawm Smith's In the Prayerbook version of (Psalms 98:6) "with trumpets s also stands also and shawms " is the rendering of what stands in the Authorized Version "with trumpets s and sound of cornets." The Hebrew s word translated cornet s ...

They modified the louder shawm into a new instrument, the hautbois. The hautbois had a narrower body than the shawm and was split into three sections. By the 18th century most orchestras had incoporated oboes into the ensemble.

Shawm Smith's In the Prayerbook version of (Ps 98:6) "with trumpets s also stands also and shawms " is the rendering of what stands in the Authorized Version "with trumpets s and sound of cornets." The Hebrew s word translated cornet s is ...

The instrument, a slender wooden tube whose column of air is activated by the player's blowing forcefully through a bound double reed, distinguished itself from its ancestor the shawm by allowing the player more direct contact with the reed, ...

The Concise Oxford Dictionary of Music (2004)

Online dictionaries and encyclopedias with entries for Shawm

Couldn't select: You have an error in your SQL syntax; check the manual that corresponds to your MariaDB server version for the right syntax to use near 'shawm"" IN BOOLEAN MODE) LIMIT 1,1' at line 1