Definition of the noun symbology

What does symbology mean as a name of something?

Symbology: Also known as processual symbolic analysis, symbology was developed by Victor Turner in the mid-1970s to refer to the use of symbols within cultural contexts, in particular ritual. In anthropology, symbology originated as part of Victor Turner's concept of "comparative symbology". Turner was professor of Anthropology at Cornell University, the University of Chicago, and finally he was Professor of Anthropology and Religion at the University of Virginia.

Printed dictionaries and other books with definitions for Symbology

The GS1 EAN 13 symbology is the one most people are familiar with and is a major product codification system used to...

Symbology is a circus, it is a school of agriculture, it is present day alchemy, it is human ecology. Ultimately all ideas, metaphors, and symbols fade. Human life becomes expressive of the divine in magnetic purity. Evolution is assisted.

The American Antiquarian and Oriental Journal (1909)

Symbology is a visible expression in concrete of human history, religious thought, mysticism, and natural objects, and its intimacy with antiquity gives a wonderful fascination to its study, because it is truly a book of revelation. All that it needs is ...

Informatics for the Clinical Laboratory (2005)

A Practical Guide for the Pathologist by Daniel Cowan

Since the defining characteristic of a one-dimensional bar code system or symbology is the ratio of widths of elements, not absolute size, the codes may be printed in a size and density suitable to a particular application. Density in this context ...

Symbology is an artful way to express the mystery of life: “It is speaking without speaking.

The symbology is that we have to unload ourselves from the beliefs about who we think we are, in order to live in inner peace. We are not anything like what others see on our outside -- our possessions and our job titles. When we identify with ...

From Bar Codes to Chip Implants by Michael, Katina

explains a symbology is a language with its own rules and syntax that can be translated into ASCII code. Common to all symbologies is that the barcode is made up of a series of dark and light contiguous bars (Collins & Whipple, 1994, pp.

Symbology is a language used in bar code technology, just like French or Spanish. Symbology allows a scanner and a bar code to “speak” to each other. Most people are familiar with the bar codes seen in grocery or retail stores, but there are ...

Symbology is the term used to describe the font in which a machine-readable code is written.18 Bar codes have printed bars and intervening spaces that define the output. The type and number of characters encoded, the print quality, and the ...

Symbology. and. its. Clues. for. Healing. Body symbology is a tool for healing the body/mind connection. Using body symbology can be an access point for healing. It provides a way for us to listen to the messages of our body to find a ...

The Ezzrath Metaphysical and Biblical Encyclopedia (2001)

Symbology — The universe is made up of visual imagery and as intelligent species symbology can be utilized to permanently keep one's thoughts, beliefs, and customs within physical consciousness perpetually. Well-excepted visual symbols ...

HEAD-UP AND HELMET- MOUNTED DISPLAYS A HUD is a cockpit-mounted virtual visual display in which the pilot views symbology or imagery overlaid on the real-world scenery as viewed ...

Personal symbology is often connected to these dreams. By looking at contracted fear responses, both in the dream and after, you can discover your subconscious blocks. One woman's dream, which forewarns of the emergence of breast ...

See SYMBology. Symbology (sim-bol'o-ji), n. [Gr, symbolon, symbol, and logos, discourse.] The art of expressing by symbols. De Quincey. Note. According to correct etymological construction this and the two preceding words should be written ...

Online dictionaries and encyclopedias with entries for Symbology 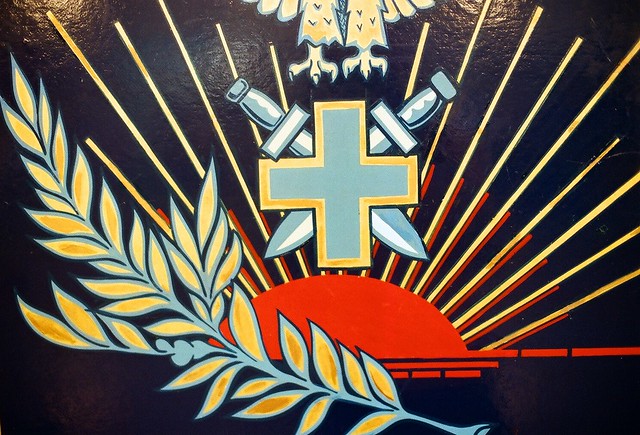