Ugly appears in the following palindrome (phrase that reads the same backward as forward):

Distribution of usage frequency for the most common synonyms of the adjective ugly:

The word ugly is considered to be an easy one, according to the Dale-Chall word list, which includes 3000 words that all fourth-grade American students should know and understand.

Definition of the adjective ugly

What does ugly mean as an attribute of a noun?

Ugly is one of the top 1000 most common adjectives in the English language.

Alternative definition of the adjective ugly

Definition of the noun ugly

What does ugly mean as a name of something?

"Ugly" is a book by Donna Jo Napoli.

Ugly is a fictional character from the 1988 film The Romancing Star II.

Phrases starting with the word Ugly:

Phrases ending with the word Ugly:

Printed dictionaries and other books with definitions for Ugly

The “Ugly Appearance” was the image of a fierce creature whose gaze could turn a man to stone. Arthur's knight Greu delivered the realm of the Wise Lady from its terror, and Merlin dumped it into the gulf of Satellie. In Der Pleier's German ...

Online dictionaries and encyclopedias with entries for Ugly 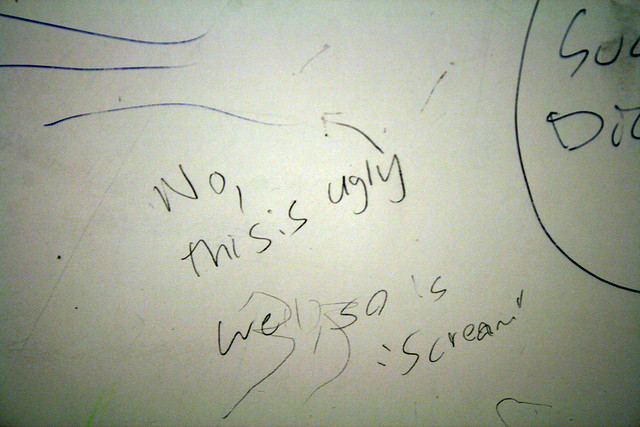 Youth is
Ugly for
Old...


Old is the
Ugly for youth

Making old
For mind
Think to do
Each and every
One of the life... (Otteri Selvakumar)
more quotes about ugly...