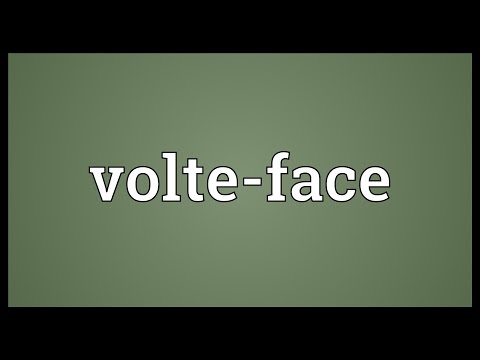 Definition of the noun volte-face

What does volte-face mean as a name of something?

"Volte-face" a.k.a. "Face/Off" is a 1997 American science fiction action thriller film directed by John Woo and starring John Travolta and Nicolas Cage. Travolta is an FBI agent and Cage is a terrorist, sworn enemies who assume the physical appearances of each other. The film exemplifies Woo's signature gun fu and heroic bloodshed action sequences, and has Travolta and Cage each playing two personalities, making both actors the protagonists and antagonists at the same time. It was the first Hollywood film in which Woo was given complete creative control and was acclaimed by both audiences and critics. Eventually grossing $245 million worldwide, Face/Off was a financial success, and has since become a cult classic.

Volte-face is a total change of position, as in policy or opinion; an about-face.

Printed dictionaries and other books with definitions for Volte-face

volte-face. About face [F] volti. Turn over [It] voluntas. Volition; will; intention [L] Voluntas reputatur pro facto. The intention is to be taken for the deed [L] vomitoria. Exits of large ...

Lovecraffs The Call of Cthulhu and Other Weird Stories volte-face (VOLT FAHS, also VOL tuh FAHS) - n. a reversal of attitude, opinion or policy, 2. an about-face; physically turning to face the opposite direction.

vixen | volte-face voice-over a piece of speech in a film or broadcast that is spoken by a person who is not seen on the screen. 2voiceless adjective. voicemail noun an electronic system which can store messages from ...

Online dictionaries and encyclopedias with entries for Volte-face

Couldn't select: You have an error in your SQL syntax; check the manual that corresponds to your MariaDB server version for the right syntax to use near 'volte-face"" IN BOOLEAN MODE) LIMIT 1,1' at line 1