Definition of the noun Wagonette

What does Wagonette mean as a name of something?

Printed dictionaries and other books with definitions for Wagonette

Later, in the second half of the 19th century the term Wagonette came into use to denote a lighter horse-drawn carriage for passengers and light goods transportation.

The Rhymester or; The Rules of Rhyme - A Guide to English Versification, with a Dictionary of Rhymes, and Examination of Classical Measures, and Comments Upon Burlesque, Comic Verse, and Song-Writing. (2017)

wagonette walk loads; a cart. 2 an open truck or closed van for carrying railway freight. 3 colloq a car, especially an estate car. 4 a tea trolley. [16c: from Dutch wagen] □ wagoner n the driver of a wagon. ♢ on the wagon colloq abstaining from alcohol, off the wagon colloq no longer abstaining from alcohol. wagonette / waga'net/ >n a kind of horse-drawn carriage with one or two seats positioned crosswise in the front, and two back seats positioned lengthwise and facing each other.

Wagonette – (noun) a four wheeled horse drawn pleasure vehicle with facing side seats and one or two seats arranged crosswise in front. Wagonettes are hardly in use today, they have given way to modern sleek cars. Wagtail – (noun) a slender songbird with a long tail ...

Online dictionaries and encyclopedias with entries for Wagonette 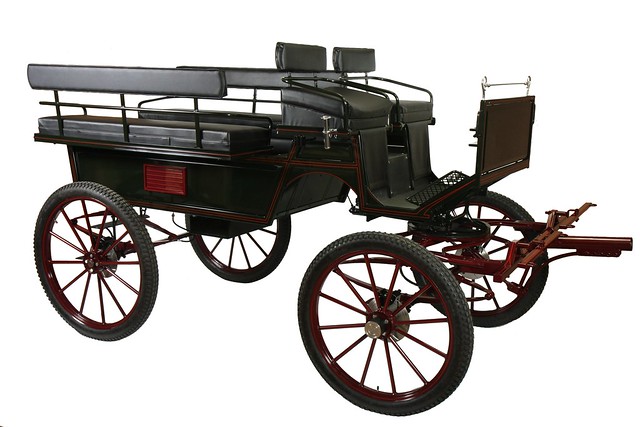 Video shows what wagonette means. A kind of pleasure wagon, uncovered and with seats extended along the sides, designed to carry six or eight persons ...

Go to the pronunciation of Wagonette to learn how to say it correctly!