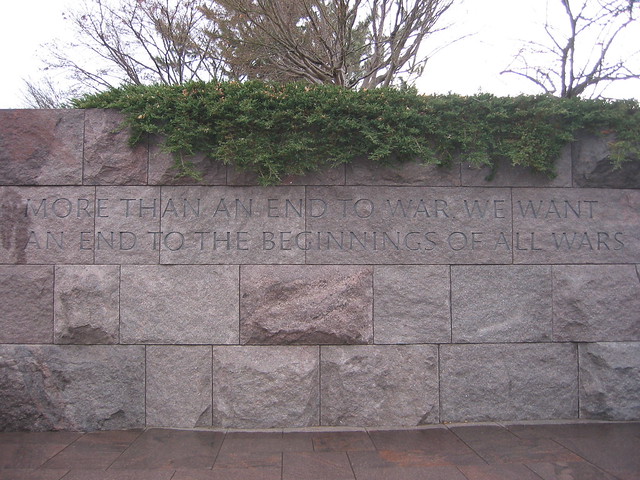 Examples of An End

It's about time we brought this party to an end, isn't it?

What will it take to bring an end to this trade?
(Sydney Morning Herald - National, 21 June 2016)

Would an end to opinion surveys be good for democracy?
(BBC News - Politics, 20 January 2016)

But does that necessarily spell an end to coal plants?
(Forbes - Technology, 14 February 2016)

Will the US cut its losses and bring America's longest war to an end?
(BBC News - World News, 24 January 2017)

But with an end to tax credits looming, will doing so make buyers happy?
(Mark Rogowsky, Contributor http://www.forbes.com/sites/markrogowsky/ in Forbes - Technology, 22 February 2017)

Is the HDR gaming saga for owners of LG B6 TVs finally coming to an end?
(John Archer, Contributor http://www.forbes.com/sites/johnarcher/ in Forbes - Business, 14 March 2017)

Where is the politician decisive enough to bring the Julian Assange farce to an end?
(Daily Mail - News, 13 August 2015)

Is the debate over pricing carbon emissions slowly nearing an end or has it only just begun?
(Aaron Wherry in CBC News - Politics, 6 November 2016)

Mexico is the world's fourth largest car exporter, but could Donald Trump bring this to an end?
(BBC News - World News, 23 May 2017)

Read also: An End to Alimony Would be Good for Women Getting divorced but you haven't worked for 20 years?
(Forbes - Personal Finance, 28 October 2014)

With the excitement of CES coming to an end, have we seen anything radical or new in the smartphone world?
(Forbes - Technology, 8 January 2015)

Putting an end to the speculation, America Movil has made its move on Austria's incumbent telco - but what's its grand plan?
(ZDNet - Just News, 25 April 2014)

Someone please show me where it is written that an end of the year prediction for the coming year has to be released before the start of the new coming year?
(Forbes - Entrepreneurs, 13 January 2016)

As social media shifts from shouting through a public megaphone to private conversations within walled gardens, is the era of social media analytics coming to an end?
(Forbes - Business, 23 March 2016)

The Safe Harbour agreement allowed the transfer of personal data between the European countries and the US, when this came to an end it was replaced with the Privacy Shield agreement, the question is: Is is up to the job?
(Bernard Marr, Contributor http://www.forbes.com/sites/bernardmarr/ in Forbes - Technology, 29 March 2017)

JONATHAN MCEVOY AT SILVERSTONE: Was it at 2.01pm on Saturday that Lewis Hamilton’s extraordinary miscalculation brought an end to his dreams of a second world title and his wider hopes of becoming an all-time great of his sport?
(Daily Mail - Sport, 6 July 2014)

Everything has an end.

All things must have an end.

The festival came to an end.

My life is coming to an end.

The month is drawing to an end.

The game was drawing to an end.

The second term came to an end.

The vacation is close to an end.

My summer vacation is at an end.

He brought his speech to an end.

The longest day must have an end.

Knowledge is not an end in itself.

The recession is coming to an end.

The meeting came to an end at noon.

The longest night will have an end.

They brought the trouble to an end.

His ingratitude is never at an end.

The holidays came to an end at last.

The long war came to an end at last.

Everything comes to an end sometime.

The conference was drawing to an end.

The party came to an end at midnight.

The long game came to an end at last.

Even the longest day will have an end.

They called for an end to the fighting.

The vacation came to an end all too soon.

The second term came to an end yesterday.

Whatever has a beginning also has an end.

The war brought their research to an end.

He tried to bring the argument to an end.

Many Russians demanded an end to the war.

The concert came to an end at ten o'clock.

The long discussion came to an end at last.

His death brought the expedition to an end.

Leisure has been viewed as a means to an end.

The battle doesn't seem to be nearing an end.

Even the mightiest of empires comes to an end.

The Tokugawa Shogunate came to an end in 1868.

It's an end to the evil, of all Skyrim's foes.

I suggested that we bring the meeting to an end.

Lack of money brought my travel plans to an end.

They demanded an end to the flood of immigration.

At length the discord between them came to an end.

His depression came to an end when she kissed him.

It was after four years that the war came to an end.

Nuclear war will bring life on this planet to an end.

Whatever fate has created, fate will bring to an end.

The Holy Roman Empire came to an end in the year 1806.

I suggested that we should bring the meeting to an end.

At last both countries agreed on putting an end to the war.

World War II came to an end in the 20th year of the Showa era.

The constant border wars between England and Scotland came to an end.

Their unbeaten record came to an end with an embarrassing -0 defeat.

The long cruel winter at last came to an end, giving place to a gentle warm spring.

Knowledge in itself is not an end, but a means to an end: to live a full and humane life.

It looks like cherry blossom-viewing season is at an end. You can see the petals fluttering down.

Science is a good thing, but it is not an end in itself; it is a means toward an end and that end is human betterment.

As the lesson comes to an end, even if the teacher doesn't say a word of "be quiet", "sit down!," the children naturally return to their seats and quieten down.

Act in such a way that you treat humanity, whether in your own person or in the person of any other, never merely as a means to an end, but always at the same time as an end.

Magic words and incantations are as fatal to our science as they are to any other. Methods, when classified and separated, acquire their true bearing and perspective as a means to an end, not as ends in themselves. We seek to find peace of mind in the word, the formula, the ritual. The hope is illusion.

The argument is at an end.
(Saint Augustine)

Such a beginning, such an end.
(German proverb)

There is an end of an auld sang.
(Scottish proverb)

Everything has an end except God.
(Dutch proverb)

The langest day will have an end.
(Scottish proverb)

The longest day soon comes to an end.
(Traditional proverb)

Every choice you make has an end result.
(Zig Ziglar)

The darkroom is just the means to an end.
(Kim Weston)

Anything with a beginning also has an end.
(African proverb)

The war of the eyes never comes to an end.
(Bajan proverb)

The cause at an end, the effect is removed.
(Latin proverb)

In every death, a busy world comes to an end.
(Mason Cooley)

Every thing hath an end and a pudding has twa.
(Scottish proverb)

Cunning comes to an end, what remains is folly.
(Bantu proverb)

Trifling at an end, now let us go to the point.
(Latin proverb)

Somewhere out there the world must have an end.
(Wislawa Szymborska)

Better never to begin than never to make an end.
(English proverb)

Everything has an end with the exception of God.
(Dutch proverb)

Everything that has a beginning comes to an end.
(Marcus Fabius Quintilian)

The end of a picture is always an end of a life.
(Sam Peckinpah)

I don't think it's by any means an end to my career.
(Mario Vazquez)

Toil without song is like a weary journey without an end.
(H.P. Lovecraft)

Riches are not an end of life, but an instrument of life.
(Henry Ward Beecher)

After the accident Black Sheep was pretty much at an end.
(Lou Gramm)

A real failure does not need an excuse. It is an end in itself.
(Gertrude Stein)

Art is not an end in itself, but a means of addressing humanity.
(Modest Mussorgsky)

Democracy and socialism are means to an end, not the end itself.
(Jawaharlal Nehru)

More than an end to war, we want an end to the beginnings of all wars.
(Franklin Delano Roosevelt)

That friendship will not continue to the end which is begun for an end.
(Francis Quarles)

Diplomacy is not an end in itself if it does not advance U.S. interests.
(John Bolton)

Mickey Mouse is, to me, a symbol of independence. He was a means to an end.
(Walt Disney)

I have seen an end of all perfection but thy commandment is exceeding broad.
(Bible)

If the law is upheld only by government officials, then all law is at an end.
(Herbert Hoover)

My to-do list is so long that it doesn't have an end; it has an event horizon.
(Craig Bruce)

Forcible ways make not an end of evil, but leave hatred and malice behind them.
(Thomas Browne)

Don't miss the pronunciation examples of An End to learn how to say it correctly!

Go to the thesaurus of An End to find many related words and phrases!