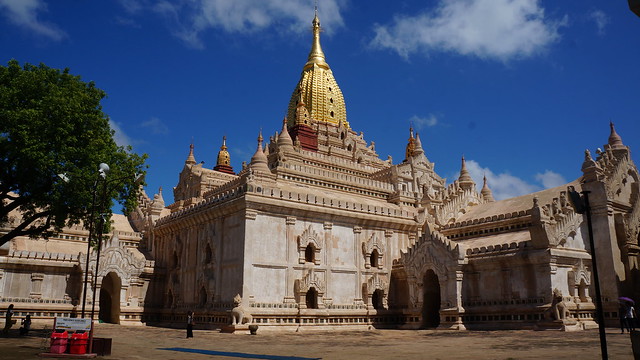 Bagan is an ancient city located in the Mandalay Region of Burma. From the 9th to 13th centuries, the city was the capital of the Kingdom of Pagan, the first kingdom to unify the regions that would later constitute modern Myanmar. During the kingdom's height between the 11th and 13th centuries, over 10,000 Buddhist temples, pagodas and monasteries were constructed in the Bagan plains alone, of which the remains of over 2200 temples and pagodas still survive to the present day.

Printed dictionaries and other books with definitions for Bagan

” History then corroborates the statements in the sanads that the total area of the Bhot Bagan is a trifle upwards of 150 bighas, and shows that the object of the grant ...

And as Marco Polo wrote: “Bagan is a gilded city alive with tinkling bells and the swishing sounds of monks' robes.” Founded almost 1,200 years ago, Bagan served as the first royal capital between 1044 and ...

PAGAN (BAGAN). Located on the east bank of a bend in the Irrawaddy ( Ayeyarwady) River in Mandalay Division, the Pagan region, bounded on the northeast by the village of Nyaung-U and on the south by Pagan New Town ( Bagan Myothit), ...

Online dictionaries and encyclopedias with entries for Bagan